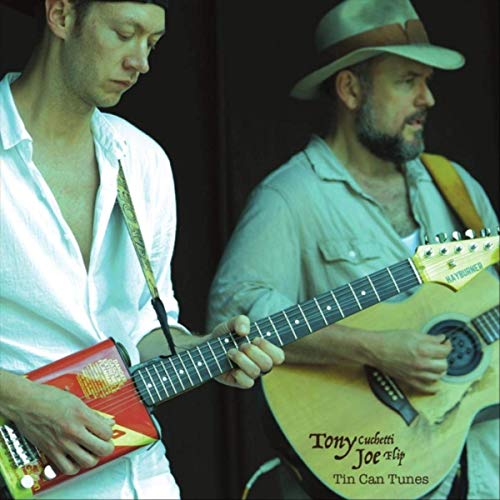 As I read the sleeve notes I was taken aback somewhat when I read Hayburner guitar, in actual fact it’s an oil can guitar made from antique gas cans.

Anyway, as the first track Mess Around kicked in I soon got to hear what this guitar really sounded like. Put together with Tony’s vocals and acoustic guitar playing it made for a great opening track. Roots mixed with country blues; I really like this album already.

Most of the tunes on the album are written by Tony and Joe together or individually but Big River is not one of them. A brilliant song covered so well by these two guys, the simple but effective lyrics give you the sense of gently drifting down, say the mighty Mississippi aboard a paddle-steamer.

Now that’s not an easy thing to do, especially as a duo, but Tony and Joe pull it off magnificently. IJ is a dark eerie tune that co-habits with the oil can guitar brilliantly. This song grows steadily whilst still retaining its dark side to become one of the best tracks on the album.

Six Feet Underground is an example of how good their own songs are. Their own material is so good that they needn’t cover anyone else’s songs. That’s not a condemnation but an observation.

Do Your Thing is very laid-back easy listening. The way the guys gel so well both musically and lyrically is a joy to behold. I really can’t find anything negative about this album at all.

Tommy C is for me the standout track on the album. Tony’s vocals are so good here alongside stunning percussion that gives the song an almost calypso type beat. Vocals coming to the fore that left me in awe of such a fine performance.

Amazing Grace finishes the album superbly. I’ve heard many different versions of this song/hymn but I’ve never heard it on harmonica before. At just1.25 minutes guest harmonica player Indiara Sfair plays it beautifully. This is a really good album.