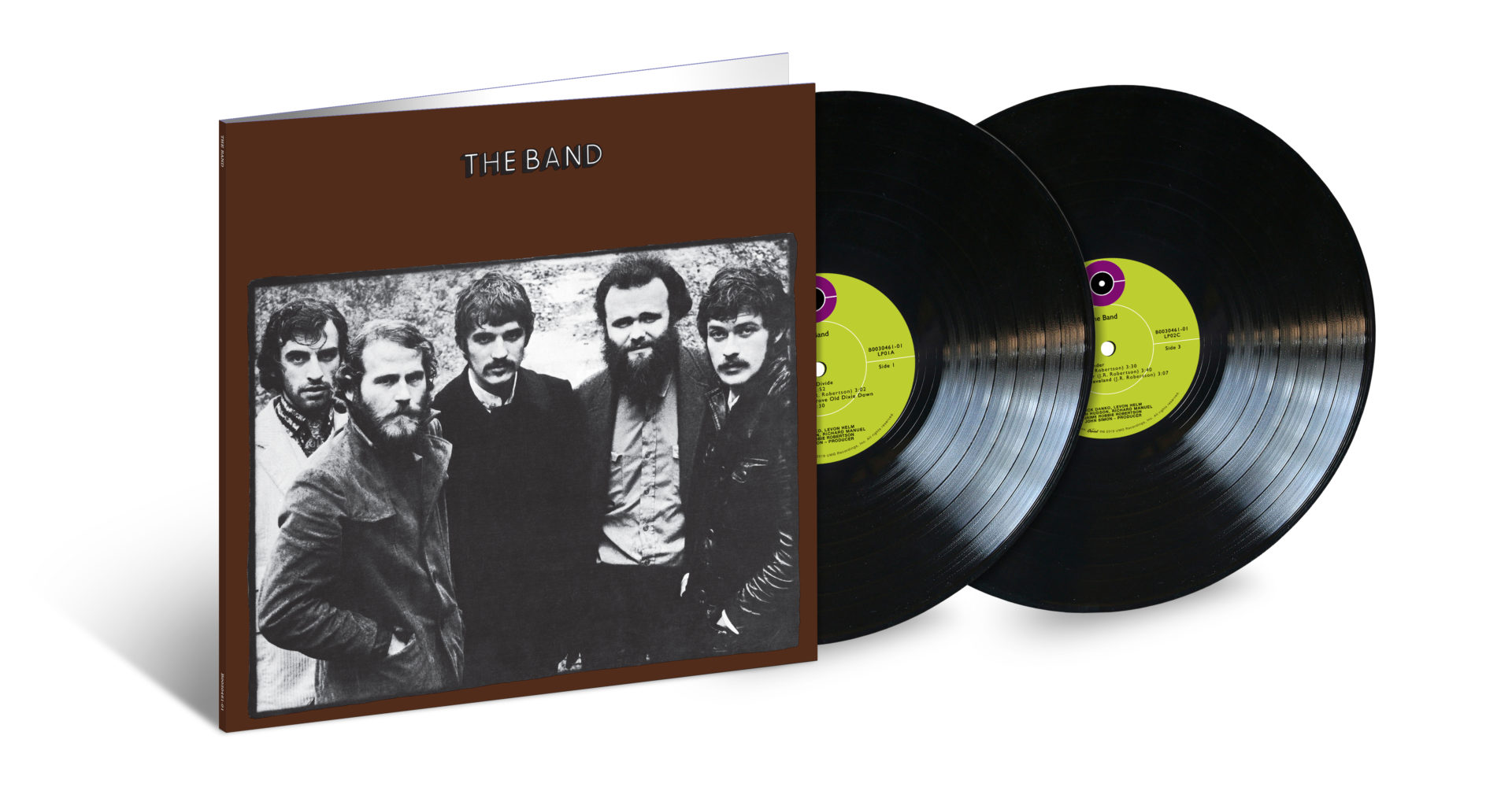 To Be Released On 15th November on UMG.

When The Band’s seminal eponymous second album was released fifty years ago on September 22, 1969, not much more was known about the reclusive group than when they released their landmark debut, Music From Big Pink to widespread critical praise and bewilderment, just the year before.

The band made up of four Canadians and one American was still shrouded in mystery, allowing for listeners and the music press to let their imaginations run wild about who these men were and what this music was that sounded unlike anything else happening at the close of the psychedelic ‘60s.

After much searching, we found the perfect spot right outside their window. Or did it find us? Levon and Rick’s yard. Woodstock, NY, ’68

And their self-titled “Brown Album,” as it would lovingly be called, cemented their status as one of the most exciting and revolutionary bands in years, on the strength of now-classic songs like “The Night They Drove Old Dixie Down,” “Up On Cripple Creek” and “Rag Mama Rag.”

All the Anniversary Edition releases were overseen by Robertson and feature a new stereo mix by Bob Clearmountain from the original multi-track masters, similar to the acclaimed 50th Anniversary collections of last year’s Music From Big Pink releases.

The 50th Anniversary Edition’s CD, digital, and box set configurations also include 13 outtakes, featuring 6 previously unreleased outtakes and alternate recordings from The Band sessions, as well as The Band’s legendary Woodstock performance, which has never been officially released.

Clearmountain and Robertson’s approach to remixing the beloved album was done with the utmost care and respect for the music and what The Band represents. “The idea was to take you deeper inside the music, but this album is homemade,” Robertson says in the liner notes. “You can’t touch up, a painting. It has nothing to do with what you get when you go into a recording studio.”

When he expressed his concerns to Clearmountain, the renowned engineer and producer reassured him: “We’re just trying to overcome the original technological limitations in order to bring you closer into the room,” he explained. “I’m going to do everything in my power not to get in the way of this music at all.”

The result is a new mix that allows listeners to hear these classic songs in stunning, and oftentimes startling, clarity, packing more of a sonic and emotional punch than ever before. The included, early, and alternate versions offer fans the ability to hear the evolution of these tracks or as Robertson says, “That’s us trying to teach ourselves how to play these songs.”

After more than eight years of playing together, first as members of Ronnie Hawkins’ backing band, the Hawks, then as Levon & The Hawks and then as Bob Dylan’s backing band on his infamous 1965-66 tour, where they were booed nearly every night as they helped Dylan transition from folk to electric rock on his pivotal tour, Robertson, Danko, Manuel, and Hudson found a sanctuary in West Saugerties, New York at a house they dubbed “Big Pink.”

After much searching, we found the perfect spot right outside their window. Or did it find us? Levon and Rick’s yard. Woodstock, NY, ’68

Here they were able to get away from the chaos of the Dylan tour and work on their own music, often in the company of Dylan, who lived in nearby Woodstock. Over the next year, the foursome woodshedded songs and in this communal house had a relaxed, productive environment where they were free to create whenever the mood struck.

In October 1967, Helm, who left the Dylan tour to return home to the south for a stint, re-joined his friends and The Band was born. The group wrote new music and prepared to record their first full-length album. Out of this also sprung “The Basement Tapes” with Dylan.

Shortly after the release of Music From Big Pink, bassist Rick Danko broke his neck in a serious car crash and was in traction resulting in The Band’s inability to tour. This only fueled the mystique as they had yet to play live and had only done a few mysterious interviews, including a Rolling Stone cover story featuring a photo of them with their backs to the camera.

Once Danko was healed, the guys relocated to Los Angeles to record their follow-up album. Searching for the same clubhouse vibe they had at Big Pink, they eschewed a traditional studio and moved into a house in the Hollywood Hills that had previously been owned by Sammy Davis Jr. The place had enough bedrooms that the group could reside there with their families and a pool house where they set up the studio.

While Capitol Records was dumbfounded the guys didn’t want to record in one of their state-of-the-art studios down the street, they ultimately relented and paid for the shipment of their equipment across the country. Recording here was not without its obstacles as getting an upright piano up to the house proved trying and since they were in a residential neighbourhood, the pool house needed to be soundproofed from the outside, which was quite a sight.

Robbie in the centre, Richard at the piano, rehearsing at Richard and Garth’s house on Spencer Road. Woodstock, NY, ’68

Following dinner together with their families in the main house, The Band, joined by co-producer John Simon who helped shape their sound, as on their debut, would shuffle off to their makeshift studio to write and record their masterpiece, working through the night and stopping around dawn. Listening to these dusty, rural songs, it’s hard to believe they weren’t written in the Appalachian Mountains but instead perched up in the hills overlooking Los Angeles’ sprawling, smoggy metropolis.

“It’s fitting then that the first song the group recorded for the album was “The Night They Drove Old Dixie Down,” a Civil War story that was inspired by a visit Robertson made to Helm’s family in Marvell, Arkansas.

During one of their talks, Helm’s father insisted to Robertson that “The South will rise again!” “I felt that I understood something about Levon from meeting his family,” Robertson says. “I wanted to write a song that he could sing better than anyone in the world.” The song imbues the people of the South with a forlorn dignity much in contrast to their stereotypical portrayals in popular culture – and Helm’s heart-rending vocal tells the song’s story with consummate grace.

This was not the subject matter that other songwriters were mining from at the time and illustrated how The Band’s primary songwriter, Robertson, did not draw inspiration from typical rock sources, instead pulling from history and his love of classic films and screenplays. As DeCurtis writes in his included essay, Robertson “also found it inspiring to conceive of The Band as a kind of repertory theater in which Manuel, Helm and Danko, three extraordinary and versatile vocalists, could be cast like characters in a play – each song its own carefully drawn portrait of a time, place and person that the singer could fully occupy.”

Indeed, The Band explores America’s thorny history through indelible archetypes — “The Night They Drove Old Dixie Down” refers to Union cavalry officer George Stoneman’s attack on southwestern Virginia in the last days of the Civil War, “King Harvest (Has Surely Come)” is sung from the perspective of a poverty-stricken farmer who becomes a “union man” to his disappointment, and “Up on Cripple Creek” is about a truck driver’s debauched time with a local girl in Lake Charles, Louisiana.

“It was a complicated record,” Helm wrote in his memoir, “This Wheel’s On Fire.” “We wanted to make one that you didn’t really get until the second time you played it.”

Shortly before releasing their sophomore effort, The Band played their second-ever show at Woodstock in front of nearly half a million people. Originally slated to close the festival, they opted to let Jimmy Hendrix end the three-day counterculture gathering so they could play earlier in the evening to better suit their music.

By the time they went on around 10 pm, the rowdy masses were battered by a weekend of rough weather, loud music and an untold amount of substances and as Helm recounted in “Wheel,” “You kind of felt you were going into a war,” he wrote. “There weren’t any dressing rooms because they’d been turned into emergency clinics . . . The crowd was real tired and a little unhealthy.” Yet, The Band persevered and when they started to perform what Robertson calls “hymns,” a spell descended on the crowd and everyone mellowed out.

The Band by Elliott Landy

For the first time, this transfixing 11-song performance can now be heard in full as part of the Super Deluxe boxed set. Being only The Band’s second show, the set focuses heavily on songs from Music From Big Pink, including “The Weight,” “Long Black Veil,” “Tears Of Rage,” “Chest Fever” and “This Wheel’s On Fire,” as well as their rendition of The Four Tops’ “Loving You Is Sweeter Than Ever.”

The Band was released on September 22, 1969, and made an immediate cultural impact. As DeCurtis writes, “it further enhanced the distinctive reputation The Band had earned with Music from Big Pink without at all diminishing the ineffable, category-defying quality of its music. The days of the group being a so-called ‘underground’ band were over.

In short order, The Band appeared on ‘The Ed Sullivan Show,’ one of only two television appearances the group would ever make, and it had a hit single with ‘Up on Cripple Creek.’ In addition, The Band appeared on the cover of Time magazine in January of 1970, the first North American group ever to do so.

The Band was instantly hailed by the press with The Village Voice’s chief music critic and senior editor Robert Christgau, calling it an “A-plus record if I’ve ever rated one” and deeming it “even better” than the Beatles’ classic Abbey Road, released the same week.

Ralph J. Gleason wrote in his glowing review for Rolling Stone: “It is full of sleepers, diamonds that begin to glow at different times. As with the Beatles and Dylan and the Stones and Crosby-Stills and Nash, the album seems to change shape as you continue to play it. The emphasis shifts from song to song and songs prominent in the early listening will retreat and be replaced in your consciousness by others, only in later hearings to move to the fore again. Little things pop up unexpectedly after numerous listenings and the whole thing serves as a definition of what Gide meant by the necessity of art having density.”

The Band is preserved in the National Recording Registry and is included in the book 1001 Albums to Hear Before You Die. Rolling Stone crowned “The Night They Drove Old Dixie Down” the 249th greatest song of all time and The Band – No. 45 in their 500 Greatest Albums of All Time. Time included it in their unranked 2006 list of the 100 Greatest Albums of All Time. The Band was inducted into the GRAMMY® Hall Of Fame in 1999 and in 2017 won The Slaight Family Polaris Heritage Prize.

In 2018, the album was awarded a rare perfect 10 by Pitchfork in their Sunday Review, in which they exclaimed, “But ultimately, this record needed to be called The Band because it’s about the Band—how these men worked together, the way their personalities intersected and completed each other, the very architecture of their friendship.

The album dispels all of the assumptions we carry about how bands are supposed to work—the songwriter is all-powerful, the rhythm section is the supporting cast, hierarchies are inevitable. The Band instead operates on a paradigm in which the power comes from the bottom up and authority is dispersed evenly among compatriots.” Now, listeners can experience that brotherhood once more on The Band (50th Anniversary Edition), in which five visionaries ended up capturing the soul of America with an album, that’s influence still ripples through current music today five decades later. 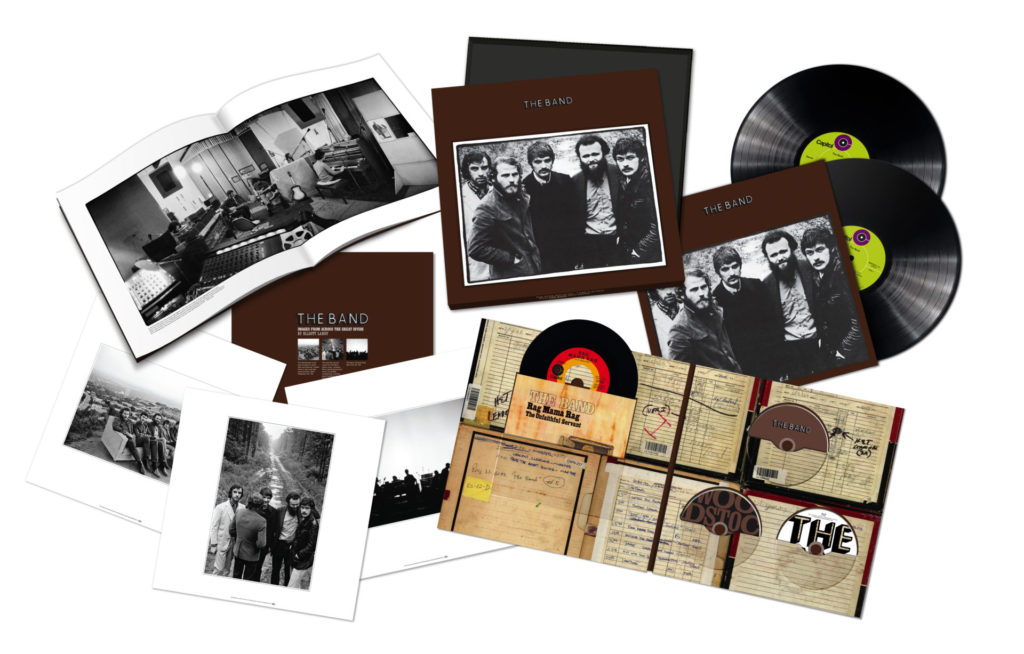