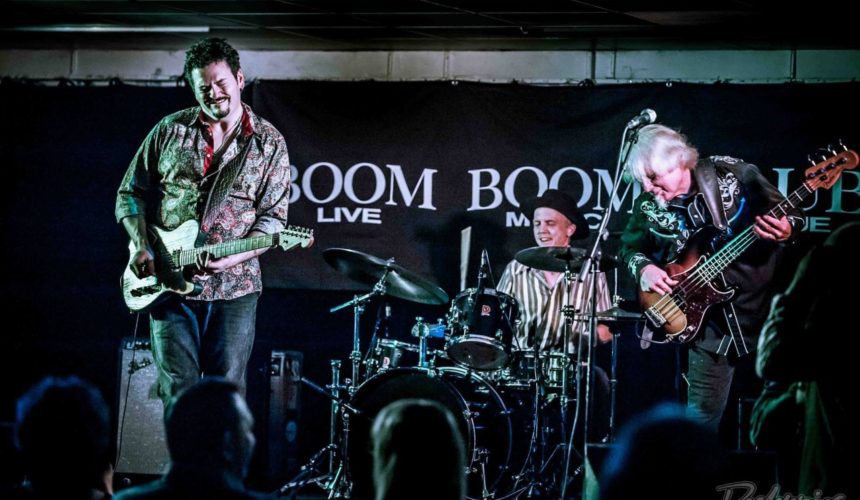 Sleep was at an absolute premium last night as the adrenaline coursed through my veins and my senses were filled with the sights and sounds of another truly memorable gig at my favourite live music venue. The guilty parties that robbed me of my rest, two bands that were the absolute epitome and definition of the term Blues Rock.

The Mike Zito Band led by the inimitable Texan Bluesman Zito and Weston Super Mare based The Blue Horizon delivered a monstrous concoction of music and vibes of this genre sending a packed house into delirium, it really was that good.

Just when I think Pete Feenstra has reached the pinnacle of high-quality entertainment he goes and raises the bar even higher and it is now at truly stratospheric levels, these two power trios really did lift the roof off the place they really were immense.

The Blue Horizon took to the stage and immediately threw down a weighty gauntlet for the evening tearing into two furious opening cuts including a blistering version of Rory Gallagher’s Bad Penny.

Propulsive bass lines and pummeling drum fills fired out and were dumped on by Iain Eccleston’s switchblade guitar attack, taut licks, lacerating solos and a deep howl of a vocal.

Vanishing Love took things just a notch structured on a deep groove spliced up by Eccleston’s sustained solo and soulful vocal. Have You Ever Loved A Woman stayed in the same pocket oozing out the burning licks as Eccleston travelled the length of the frets.

The Blue Horizon really did grab the audience by the throats and shake them down hard, finishing off their superb 45 minutes set with a filthy dirty trippy cover of Jimi Hendrix’s Purple Haze, another trench deep groove stomped on by the Wah Wah driven riffing and psychedelic solo.

The end of the set was greeted with loud applause and mass appreciation. Very much a band to watch grow in stature.

Gauntlet well and truly thrown down for the classy Texan Blues maestro Zito and suffice it to say he thrived on the challenge.

Accompanied by his own powerhouse rhythm section Zito hit the stage threw on the guitar and ripped into two fiery opening cuts of his own, Highway Mama and Keep Coming Back, an intense explosion of sounds, hard driving rhythms shot through by Zito’s stinging licks and the first in a series of arcing, sparking slide runs.

The response from the crowd as the first break in the wall of sound occurred enough to tell you that they were in the zone with the man and notice had been posted that this was going to be something to behold.

Gear shifting one notch down the trio oozed into the bump and grind of Roll On, another pounding groove sat under Zito’s languid licks and deep impassioned vocal before the pace was upped by a squally reverb driven solo.

From there straight into the wide vista of the epic Pearl River, a Blues record of the year, penned with music brother Cyril Neville.

It is evident when Mike plays this classic that it really means something to him, from my vantage point I could see the eyes close, the diagram rise as the passion was injected into both the soulful vocal and the flowing guitar lines that really did ebb and flow like a river’s tide.

Zito is not just a Blues Rock icon he can and does drift into some serious funk and that is just where he took us on the raucous Red Bird, the backline grooves ripped up by a dirty solo that was fuelled by serious depression of the Wah Wah pedal leading to a sustained trip out of a solo.

At this mid-point set the place was rocking and throbbing and responding to Zito’s infectious personality that shone through in both his expressive music and his charismatic engagement with the audience between each song, I really was in my element and totally lost to the music by now, all consciousness suspended.

Road Dog is a veritable power trip on the current album but live Zito breathes serious fire and brimstone into it creating beguiling slow Blues vibes and my best adjective to describe it would be to say majestic courtesy of two magnificent solos.

Again from my vantage point, I could see the facial and hand contortions as Zito searched inside his soul for the sounds of guitar and vocal. Right hand picking at the strings with touch and delicacy and left-hand bending and stretching the strings, luxurious sounds that enveloped the crowd and brought total hush.

Never one to dwell on things Zito hit the pedal straight away leading the band into the Texas shuffle of Wasted Time, the driving groove flooding out sliced open by razor-sharp cutting riffs and a clipped slashed solo, a real down and dirty one this.

Make Blues Not War is both the title of the new album and a statement of intent from Zito and the lyric tells you everything you need to know about what is in the man’s DNA.

There was pure joy in his features as he donned the slide bottle that eased its way up and down the frets squeezing the strings for the sounds, long, long notes eked out under the deep engine room vibe and a repeat mode riff and then a standout moment as Zito was joined on stage by Pete Sargeant on Harmonica that enabled the two to trade scorching heartfelt licks.

The end of this magnificent set brought a deserved standing ovation that demanded an encore but curfew time was fast approaching so just time for the trio to really rip it up, press the accelerator firmly to the floor and whip out one last time. The backline pushing out the throbbing pulsating groove and Zito firing off a filthy solo with heavy reverb, echo and sustain creating an absolute maelstrom of sound.

I love this dude he is undoubtedly one of the most authentic Blues men on the circuit and he pours every ounce of himself into the performance.

Align that with his dazzling fretwork, particularly the slide guitar where for me he sits right alongside Derek Trucks as the finest exponents of this art.