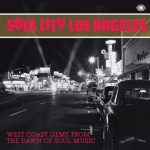 This double CD package covers the musical styles of L.A in the late 50’s and early 60’s, there are sixty tracks covered by twenty five separate artists, some of these tracks were local ‘hits’ while others are completely unknown, the original releases were recorded on several local labels including; SAR Records, Aladdin, Liberty. The musical style covered here is basically Soul although some of the artists are more renowned for their Blues and R&B sounds, one artist in particular to highlight is Johnny ‘Guitar’ Watson who is showcased with five tracks, including The Eagle is Back which demonstrates what a true bluesman he was before he turned to funk in the 70’s, other artists worthy of note are; Don & Dewey who almost have a progressive Rock feel to their music due to the use of electric violin played by Don (Sugarcane Harris) and Johnnie Taylor, who was a protégé of Sam Cook, included here is his minor hit Rome Was Not Built In A Day. The sound quality does vary across the two discs but as these recordings were originally released over fifty years ago this has to be expected and clearly shows that these are original recordings. A good compilation highlighting how the Los Angeles music scene was developing in the early 1960’s.