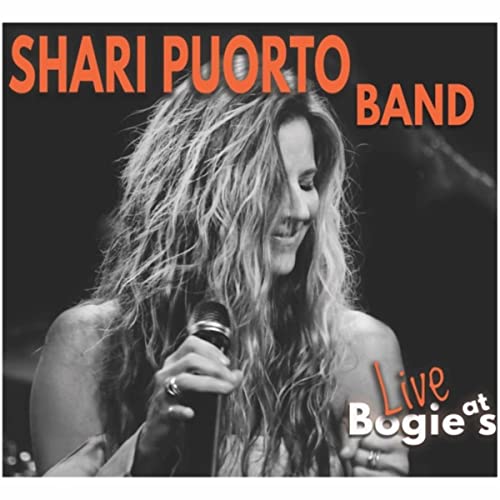 We’ve long been fans of Shari Puorto round my way but I’d somehow failed to grasp the fact that she’d released a live album. It’s not like me. Maybe I did know but was put off by the fact that the main school bully when I was a lad was called Bogie and I just didn’t want to go there. Luckily, it turns out Ms Puorto hadn’t been round his house for tea and a knees up. It’s a different Bogie.

I’ve been listening to and passing comment on her records for years but what with her being 6000 miles away in the American colonies I’ve never had the opporchancity to catch her live. I never will but this excellent release at least gives me a flavour of what she’s like in concert. Twelve tunes, a shit hot band and some rocking blues. As it should be. The band in question on this performance were John DePatie (guitar), Frank Scarpelli (bass), John Greathouse (keys, vocals), and Mike Sauer (drums, vocals). They certainly do a bang up job and the energy level is kept turned to maximum the whole way through.

For your listening delectation, there were eight originals and four covers in the set. And she certainly likes to get about on the covers what with Randy Newman, Savoy Brown, Blind Faith and Candi Staton all getting a look in. If I had to choose then it would be the Savoy Brown tune. “I’m Tired” that takes the biscuit. Red hot doesn’t begin to describe it. On the originals I was well taken with “Six Months Sober” and “Sugar Daddy”, songs I am verra familiar with. Vocally, Ms Puorto is faultless and can do raunchy and soulful at the drop of a hat.

If you are not familiar with the work of Shari Puorto then you’re a damn fool. And don’t forget to check out her latest project, “Lightning’s Lessons”, where she uses the blues to teach your kiddywinks how to do the reading and writing. Who knows, many years from now, they could be sitting in an attic typing stuff that no-one will read. Just like your beloved Mr H.