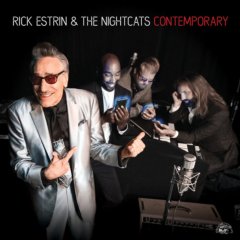 With these musically fearless players kicking everything up a notch, Contemporary explores some different sounds, instrumentation and grooves from their previous releases, as they continue to reinvent traditional blues styles. 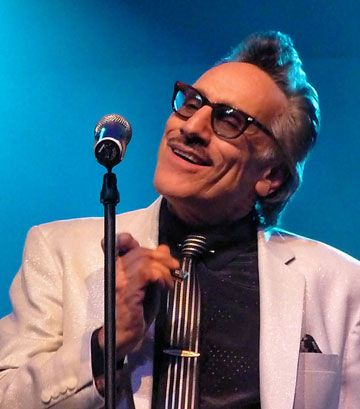 Produced by multi-instrumentalist Kid Andersen and Estrin and recorded at Andersen’s Greaseland Studio in San Jose, California, Contemporary delivers twelve surprising, wise-cracking, foot-stomping songs, including nine by Estrin (one co-written with Andersen), one each by Andersen and Farrell, and one obscure cover.

According to Estrin, “Contemporary is the most fully realized expression of who Rick Estrin & The Nightcats really are and what we’re capable of as a band. Recording at Greaseland, we all had so much fun and were so relaxed, the ideas just started pouring in from all sides. I really expect this record to blow some minds.” The UK’s Blues & Rhythm says, “Rick Estrin & The Nightcats have crafted an instantly identifiable sound. They serve up insightful, original blues combined with tough rock’n’ roll. This band is superb.”

Rick Estrin & The Nightcats have performed at festivals and concert stages from San Francisco to Chicago to New York, and everywhere in between, plus tours of the United Kingdom, Norway, Belgium, France, Switzerland, Poland, Australia, Israel and recently Estonia and Russia.

Their worldwide popularity helped Estrin win five Blues Music Awards, including two nods for Song Of The Year (1994 and 2018), Best Instrumentalist – Harmonica (2013) and Traditional Blues Male Artist Of The Year (2018).

The full band, Rick Estrin & The Nightcats, won the highly coveted 2018 Blues Music Award for Band Of The Year. On stage, the band’s ability to deliver an unpredictable, no-holds-barred show is unmatched.

The Chicago Sun-Times says, “These are serious musicians out to have a hotter than hot good time. It’s tough to stay in your seat when Estrin and his musical cohorts get cooking.”  Says Estrin, “People don’t go out to see people who look like themselves. They want to see something special. I was schooled in this business to be a showman, and that’s what you get when you come to see us perform. We know how to put on a show. I feel sorry for anyone who has to follow us.”

For more than 30 years and 9 albums, Estrin fronted Little Charlie & The Nightcats, flawlessly combining his songs, vocals and harmonica with Little Charlie Baty’s one-of-a-kind guitar excursions. The band won international acclaim and toured the world repeatedly. With Charlie’s retirement from touring in 2008, Rick took over leadership of the band. He knew the only way to replace Baty’s mashup of blues, jazz and roots rock was to find someone with an equally daredevil guitar approach. As luck would have it, Kid Andersen, who had been working with another harp legend, Charlie Musselwhite, became available. “Kid’s a fearless nut on the guitar,” says Estrin. “He’s really the only guy who could fit in with us.” The new band charged out of the gate with Twisted in 2009, following up with One Wrong Turn in 2012, You Asked For It — Live! in 2014 and Groovin’ In Greaseland in 2016. As No Depression says, “This is a band that always delivers the goods.”

To pre-order go to – Alligator Records