THE CASH BOX KINGS Hail To The Kings! 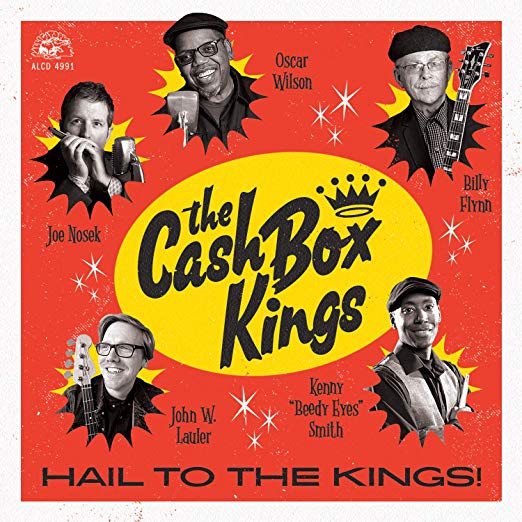 Although this album is dedicated to Matt ‘’Guitar‘’ Murphy, Otis Rush and Eddy Clearwater this is by no means a tribute album. All thirteen songs are original and penned by Joe Nosek and Oscar Wilson primarily.

Ain’t No Fun (When The Rabbit Got The Gun) is the opening track and very lively it is too. The band have swing, jump and delta blues in their make-up, all mixing together nicely. The bright up-tempo blues has me wanting more and more after only the first song.

The Wine Talkin’ features Shemeka Copeland guesting on vocals in what can only be described as a genius move by the band. Great combination with Joe Nosek on vocals. She mentions in the song that she was born in 1979. Well, that must have been a vintage year regarding blues vocalists being born.

Smoked Jowl Blues, reverts back to down and dirty Delta blues in all its glory. What strikes me about the band is the ease with which it can go from swing and jump blues to Delta blues with such gratifying ease. I like this band a lot. The structure and togetherness ooze out especially in the harder Delta blues tracks that seems to come so easy to them.

Having originated from Chicago I should not be surprised but it is still refreshing to hear a band with all styles of blues in their repertoire. Poison In My Whiskey is probably my favourite song on the album. Raw, earthy blues done so well. I must admit a weakness when I hear harmonica, guitar and vocals in perfect harmony and that’s what you get with this awesome song.

Jon Burge Blues is an unusual tale of a Vietnam vet that returns to Chicago and joins the police. Old school respect for an old school character wrapped around brilliant playing from lead guitarist Billy Flynn.

Sugar Daddy exemplifies what these guys are all about. Delta blues at its uncompromising best.

I hope to see the band perform live someday to fully appreciate their unique talent.