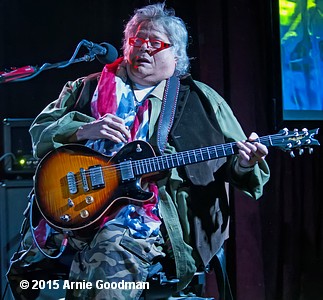 We are deeply saddened to hear of the passing of Leslie West on December 23rd, 2020.

Born in New York City on October 22nd, 1945 as Leslie Weinstein, and later changed his name to Leslie West. An innovative guitarist known for his signature tone Leslie’s first band was a young blues/soul rock band called the Vagrants.  An enthusiastic band who achieved modest US success including two minor hit singles.   First in 1966 with “I Can’t Make a Friend” and again with a cover of Otis Redding’s “Respect” the following year in 1967.

Leslie’s first solo album released in 1969 was titled “Mountain”.   Leslie liked the name so much that he gave the same name to the pioneering blues-based hard rock band he formed later that year with his good friend, bassist and producer Felix Papparlardi, with both Leslie and Felix sharing lead vocals.

Mountain’s fourth gig as a band was a guest slot playing an innovative, powerful and captivating set to introduce their new and unique hard rock sound to over 500,000 people on day two of that famous Woodstock festival.   The success that followed for the next 3-5 years for Mountain the band and their unique new hard rock sound has now become firmly etched in the archives of rock history.   Mountain’s first ever hit was “Mississippi Queen” now considered to be one of the greatest rock classics of all time.

Through Leslie’s success with Mountain, he became such an influence to the world of rock guitarists that followed including Michael Schenker, Eddie Van Halen, Randy Rhodes and many more. It seemed that everyone who was anyone in the world of rock guitar was greatly inspired by the immense natural talent and signature guitar tone of Leslie West.

Some of the world’s most well known artists have invited Leslie to guest on their albums over the years including The Who album “Who’s Next”, Ozzy Osbourne’s album “Under Cover” with a remake of “Mississippi Queen”, Ian Gillan of Deep Purple’s song “Hang Me Out to Dry” on the album “Toolbox” and many more.

A plethora of well known artists have also guested on Leslie’s own albums including Mick Jagger “The Great Fatsby”, Peter Frampton, Brian May (of Queen) and of course Leslie’s 2011 album “Unusual Suspects” which featured several including Billy Gibbons, Slash, Zakk Wylde, Joe Bonamassa, Steve Lukather and more.   Photographer and lifelong friend Arnie Goodman also captured Leslie with the lens for over 40 years.

Leslie also became renowned for the many classic blues/rock albums that he recorded.  In 2006 Leslie was inducted into the Long Island Music Hall of Fame. Despite losing the lower part of one leg in 2011 by amputation due to complications of diabetes, Leslie refused to slow down and continued recording and performing live shows around the world.

Leslie has been quoted as saying “As long as I still love to play guitar, that’s what I’m going to do.”

Leslie West is survived by his wife Jenni (whom he married on stage in 2009 to the surprise and delight of the crowd of 15,000 after Mountain’s performance at the Woodstock 40th Anniversary concert in Bethel, NY) his brother Larry and nephew Max.

One of the world’s true rock and blues guitar heroes, Leslie West will always be honoured & remembered for the musical legacy he has left behind.