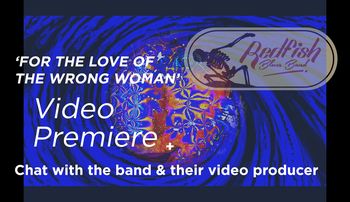 The premiere has been and gone, but here’s the video below!

Sheldon Snow, Creator with Snowshoe Media, California, has honoured Redfish Blues Band by creating a video for their song “For the Love of The Wrong Woman”. It premieres on YouTube and Facebook, Wednesday 8th of June at 7pm. As an example of the generosity of spirit that the music industry has uniquely shown during the Covid pandemic, Snowshoe Media and Sheldon Snow have gifted Redfish Blues Band with this significant piece of work.

Redfish’s combination of wicked virtuosity together with the captivating style of Sheldon’s profound insight makes for a spellbinding musical experience that is both tantalising and impressive. Melting the great divide from Cumbria to California, Redfish and Snowshoe Media will be chatting to fans online during and after the premiere. The first three fans to ask questions will be sent a personal note (or drawing) from the artist of their choice. A unique prize indeed, showing the appreciations Redfish have for their fan base.

Indeed, Redfish are highly regarded by their fans. These five dynamite musicians and song writers, each one of them a genius in their own right, come together flawlessly: Their energy first-rate. They have enough experience of life, loss, love, sadness, friendship and laughter to play the Blues, mean it and move you. Ranging from highly trained classical composer turned jazz wizard, Blues expert, experienced rock and roll artist, an elusively wicked Blues slide guitarist and a singer songwriter that has the ability to temper the senses with a passionate delivery for the lyrics, all make for an unrivalled sound for listeners.

Video Creator, Sheldon Snow, well known for his visionary talent, radio interviews and podcasts featuring musicians, has previously worked with artists such as Karena K, Wily Bo Walker and Ed Brayshaw. He is currently collaborating with The Terraplanes Blues Band who are also from the UK. Sheldon says of his work, “A lot of my videos have an abstract core to them that makes the listener a part of the music and in order to fully get it, you have to watch more than just once.” He adds with a chuckle, “The Brits seem to get what I do”.

Redfish Blues Band have been busy during the pandemic. In February they released their extremely popular live EP ‘Songs from The Fire Station’ receiving rave reviews and world airplay. A rerecording of their Souls album is due for release in August and an exclusive digital pre-release single from their up-and-coming new album of originals will be released in September. All the proceeds from the digital pre-release single will be going to the Charity ‘Speak With IT’: helping those who are lost for words due to aphasia following a stroke/injury. Website: www.speakwithit.org

The entire album of original songs is planned to be released later in the year. As usual, Redfish fans will be given a preview to some of these songs and other exclusive material at their concerts. Redfish’s 2021 concert schedule is busy despite COVID, and 2022 dates are already being booked. In order not to disappoint fans, Redfish are now making plans to stream any COVID cancelations where possible. They are looking forward to bringing their heartfelt and irresistible music to new and existing audiences throughout the rest of the year and beyond

So, what can fans expect by checking in on Wednesday to chat exclusively with the band and ask questions? Melanie Buchanan, manager for Redfish, caught up with them for this press release and asked for some facts exclusive to Blues Matters Magazine readers in advance of the video premiere. Ex-detective, Rod MacKay who bought his first bass guitar with the money his dad claimed on the insurance after his bike was stolen in Leith, told us that he once presented a record he had made to Prince Charles. Melanie assures us that Rod MacKay now has a bike again. Fraser Clark once wrote a tune for a solo accordion album also featuring a track by Acker Bilk. The remarkable Sandy Sweetman, also drummer for The Bay City Rollers, understandably has some great stories: “I once witnessed a heated argument between Pilot and Slade regarding Dave Hill’s reluctance to leave the shuttle bus in the middle of a German Forrest’ he laughs. “The memorable quote was “Who the (bleep) do you think you were!”. He went on to say, “Dave Hill then sheepishly exited the van in a zebra pyjama suit”. Sandy claims to have a photo of Dave Hill in the Zebra pyjama suit. Buchanan says she holds the stories of Stumblin’ Harris dear to her heart and will take them to her grave. Looks like Blues Matters Magazine will have to interview Harris directly for those great gems.

When Blues Matters Magazine asked Sheldon Snow what inspired him to collaborate with Redfish, Sheldon Snow stated that “it was mostly their energy” that drew him in. The same can be said of Melanie Buchanan, co-founder at The Wombles of Bragi Music Facebook group, who was asked to manage the band after she wrote a review of their album ‘Songs From The Fire Station’. So riveted by Redfish’s extraordinary talent, she scrutinised their sensational live performances online and recognised they were a refreshing act worthy to go wild about.

The story of how Sheldon Snow, based in California, met Redfish Blues Band, based 5,000 miles away is truly unique. They met through ‘Wombles of Bragi Music’. A Facebook group formed by Melanie Buchanan and Adrian Thomas during Covid to provide a worldwide performance platform support network for fans, musicians (from novices to seasoned performers) and music industry professionals.

This group, now 1K strong, and the collaborative projects that happen within it, are an example of how the music community has risen above the COVID crisis and moved together in ingenious ways through some of the toughest times we will know whilst others have fallen apart. If we look closely, we can see that Blues lovers throughout time are an example, inspiration and stronghold through adversity. Once again, music has made history.
For more details see website: www.redfishband.co.uk