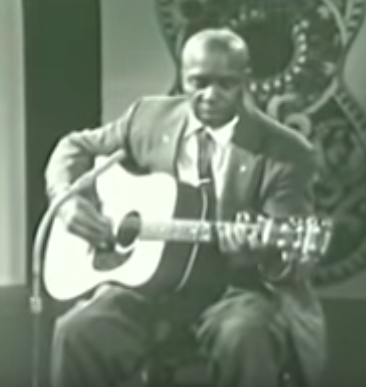 Nehemiah Curtis James was born on June 21, 1902 in an African American hospital in Yazoo City, Mississippi, He was raised on the Woodbine plantation just outside Betonia, Mississippi. He was drawn to music from an early age.

As a child he heard musicians Henry Stuckey and Rich Griffin play a frolic—a Saturday night dance party—in Betonia. Afterwards, he sang the songs he had heard constantly until his mother finally bought him a $2.50 guitar. As a teenager, he played his aunt’s organ, and his mother encouraged his interest by sending him to a couple of piano lessons. However, James was a natural musician, his talent far outstripped the educational resources available to a young African American growing up on a southern plantation.

He taught himself piano after watching a rural pianist in a barrelhouse, and he developed his guitar style on his own after Henry Stuckey showed him how to tune his guitar to an open E minor chord. Both James’ guitar and piano sound are totally unique in blues.

Skip James was unique among blues players. He was accomplished on two instruments, guitar and piano. While many lesser musicians made pests of themselves in their attempts to be recorded, James refused his offer to be recorded and embraced his rediscovery in the 1960s only halfheartedly.

Rather than the deep, rough shouts associated with many early male blues singers, James sang in a high thin wail. But his otherworldly voice, haunting guitar, and staccato piano bursts contributed to some of the greatest blues sides ever recorded.

James often played guitar with an open D-minor tuning (D–A–D–F–A–D), resulting in the “deep” sound of the 1931 recordings. He reportedly learned this tuning from his musical mentor, the unrecorded bluesman Henry Stuckey, who in turn was said to have acquired it from Bahamian soldiers during the First World War.

Skip James died of cancer on October 3, 1969, in Philadelphia. He was inducted into the Blues Foundation Hall of Fame in 1992.