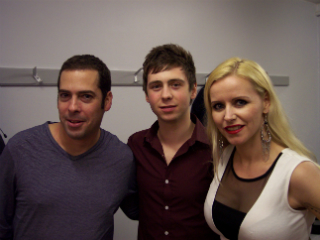 The (Ruf Records) Blues Caravan came to the Beaverwood Club in Chislehurst, a Pete Feenstra promoted venue, on 18th March 2014. Here, the stars of the show, Christine Skjoberg, Laurence Jones, and Albert Castiglia are interviewed in the artists room before going on stage. Interviewer Darren Weale is joined by Blues In Britain magazine writer John Mitchell.

To a background of a squeaky door, the moving of equipment, and a distant car alarm, the three talk about how they joined Ruf Records, each of their new albums, their tour and getting along together, Albert’s gross infected finger, and Albert’s disappointments regarding fish and chips and cider black. Also contributing a few words and other sounds are bass player Roger Inniss and drummer Miri Miettinen.