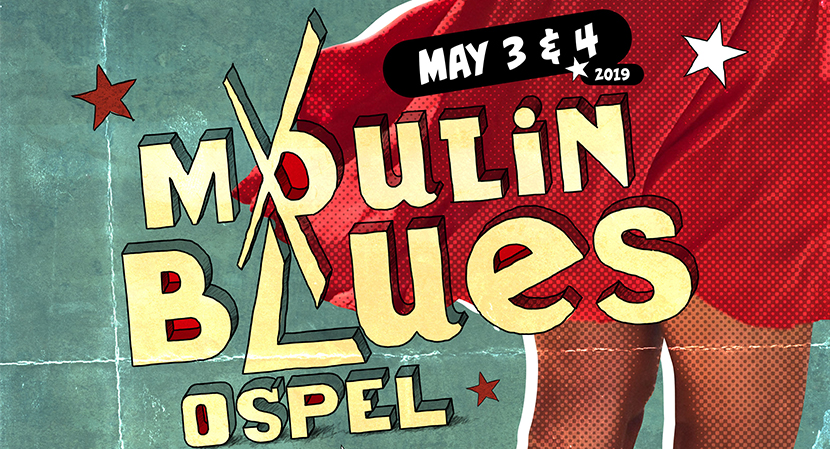 This long-running festival in the deep south of the Netherlands gives 10,000 fans a breath of country air and a superb selection of outstanding blues performers.

Spring in the Dutch countryside was in full bloom on arrival at the rural location of the Moulin Blues festival, which has been running since 1984. Setting up camp in the field next to the festival’s big tents we could see the crew hard at work completing the transformation of the open fields into a fully-functional music venue complete with stages, catering, the obligatory merch stalls and – wonder of wonders – plumbed-in toilets and showers rather than the usual chemical affairs: a feature that some other festivals could take note of! 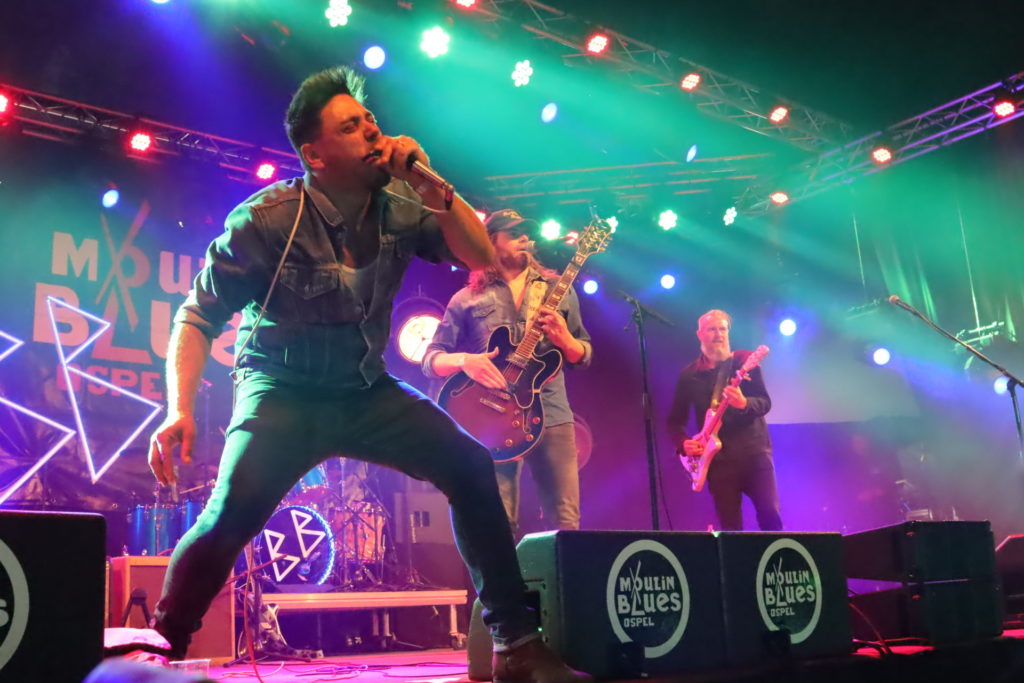 Opening day, Friday and the Boogie Beasts from Belgium opened up the main stage in front of an already sizeable crowd. A no-nonsense, hard-driving R&B act, fronted by dynamic harp player Fabian Bennardo, used their twin guitars effectively to quickly get the audience in the mood to party.

Meanwhile, just across the field in the somewhat smaller “cafe” tent, were Black Cat Biscuit. In contrast to their fellow countrymen on the main stage, these smartly suited and bearded fellows stylishly purveyed a swinging, jump blues beat, which was just as appreciated by their crowd.

Time now for the first of a number of US performers; Dave Herrero, a name familiar to many followers of the Chicago music scene. While originally from Florida, Dave has made Chicago his home for many years, working in a number of musical genres in addition to the blues. 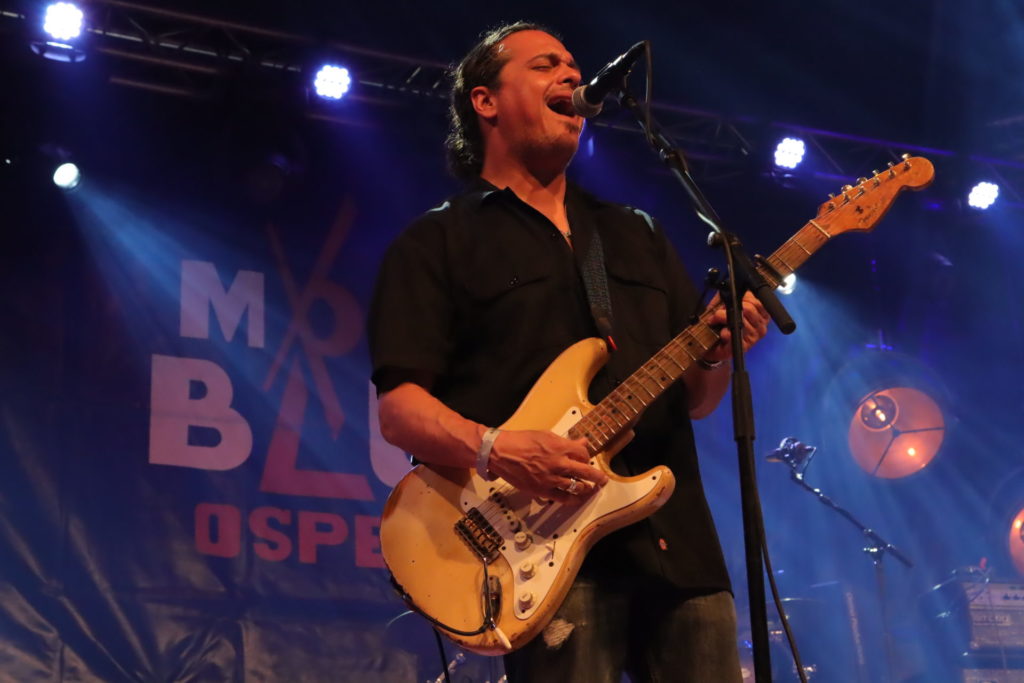 However, it’s Dave’s blues on show today, backed by a capable European touring band with an outstanding organ/piano player, Victor Puertas. Dave’s deft fingerwork and mellow vocals entranced the audience, and there were a couple of standout moments in “Catfish Blues”, and Otis Rush’s “Trouble, trouble” with excellent duetting between Dave and Victor on the Hammond B3. They drew a well-deserved encore, which allowed Victor to demonstrate his prowess on harmonica.

The Reverend Shawn Amos strutted on in impeccable style: tailored suit, straw hat and shades and yellow shoes. What a contrast then to hear a really soulful singing voice and funky harmonica licks from such a neatly-dressed package. He has the moves too, whipping around the stage working the crowd with arms waving and fingers snapping. A real treat for Friday night. 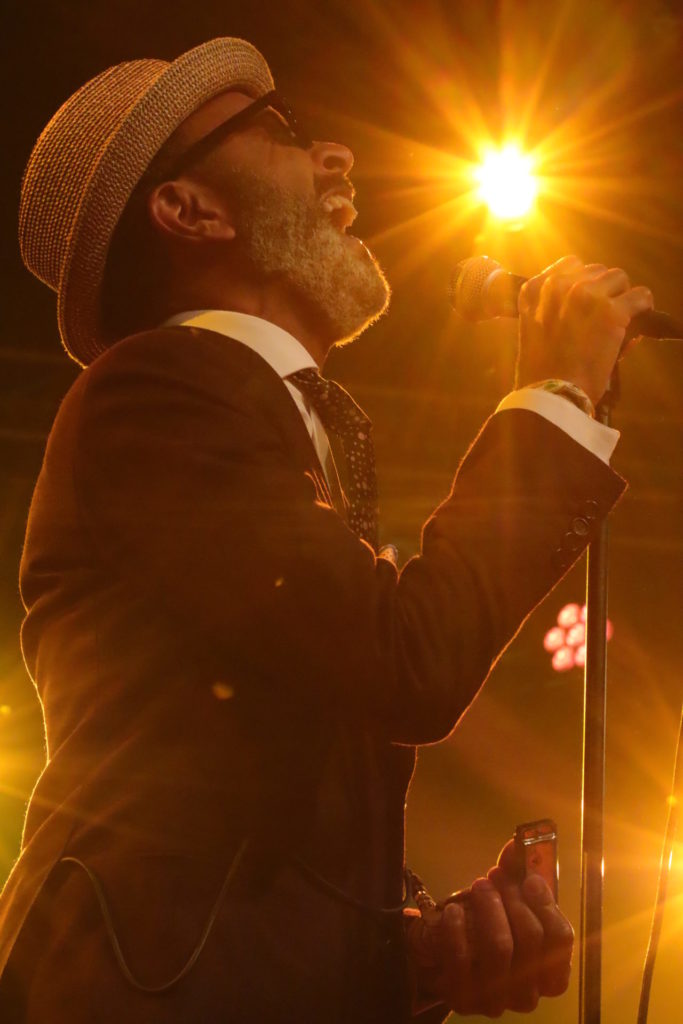 Just time before the changeover for a quick peek over at the Cafe stage to get an impression of Joakim Tinderholt, the 1950’s reincarnated, throwing down some good old roots rock’n’roll rhythms accompanied by legendary bassist Billy T Troiani who has been around the block with all the legends of RnR. 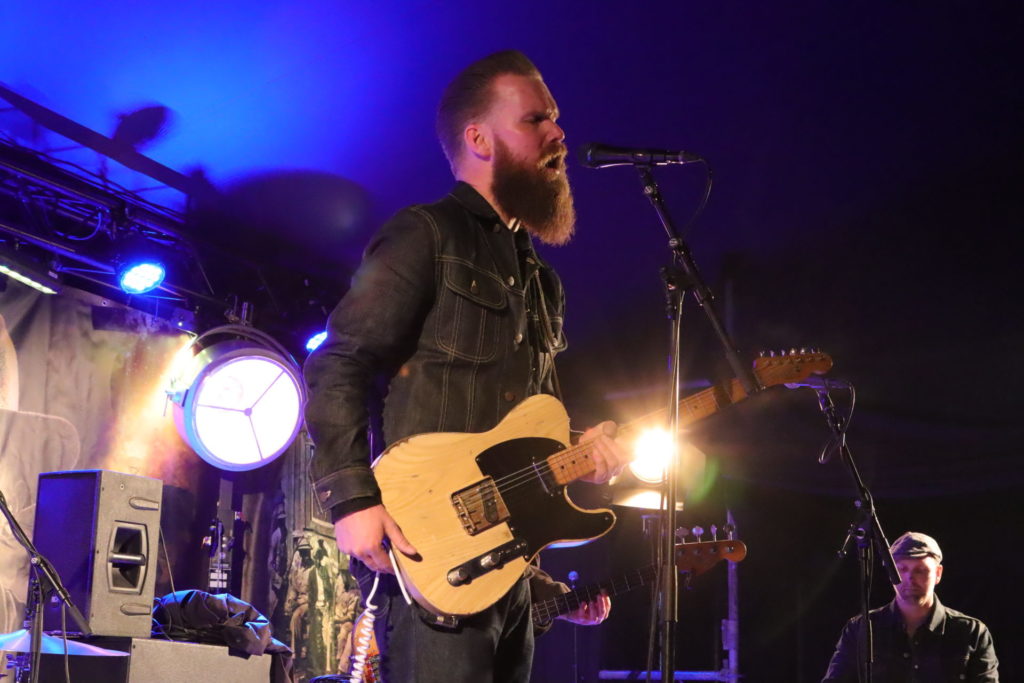 Back into the main stage and well into the meat of the evening and Zac Harmon is serving up full-fat, deep-fried, creamy good, whole blues, just the way you like ‘em. Zac invited you to his “Mississippi Barbeque”, the title of the new album, and there was plenty of goodness to go around.

This felt just like the soundtrack to the best party you ever went to, on a hot summer’s day by the Big Muddy. The audience got into the action too, singing along to a cover of “Knockin on Heaven’s Door” and having a fine old time closing with “Hey Hey the Blues is Alright”. 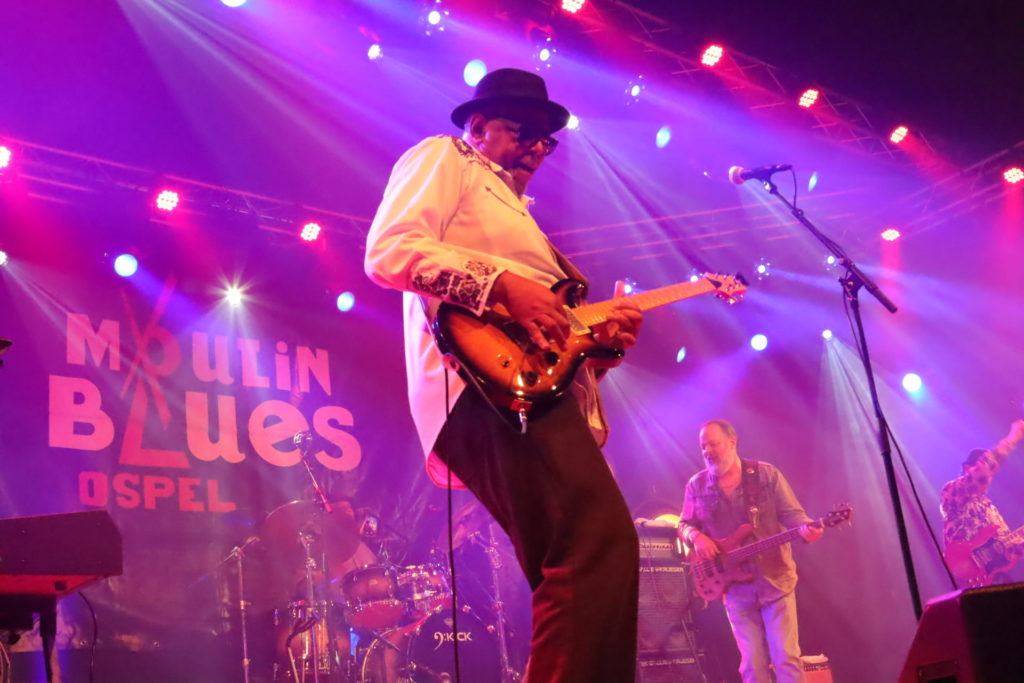 A dramatic drop in temperature came with Canadian “Ice Queen” Sue Foley, now based out of Austin Texas.  Switching from the three-piece line up to perform some classical-style guitar solo numbers demonstrated her ability as songwriter and guitar player in a set that was politely received.

Stepping the pace right back up, Joe Louis Walker came out big, loud and lively. Bassist “LB” Lenny Bradford, one of the most energetic (and possibly the most flexible) bass players of the festival, radiated joy with a luminous smile and tirelessly drove the set forward with drummer Dorian Randolph behind.

Given the breadth of repertoire JLW has developed over the years, there was a little bit of something for everyone in the set, blues, gospel, boogie, you name it. All delivered with energy, pace and style, it was a great way to send the crowd home happy.

Saturday morning came with a definite chilly turn in the weather, as the hardy campers emerged from their sleeping bags, tents and camper vans to look for warmth while a hailstorm passed through.

Fortunately, things were due to heat up with the first of the day’s performer’s Samantha Martin. Bouncy, bubbly, big and beat-y, Samantha, her band and her backing singers filled the stage with more than just bodies. This raw-edged, gutsy singer with ebullient personality was just the type of performer needed to warm up a cold crowd. 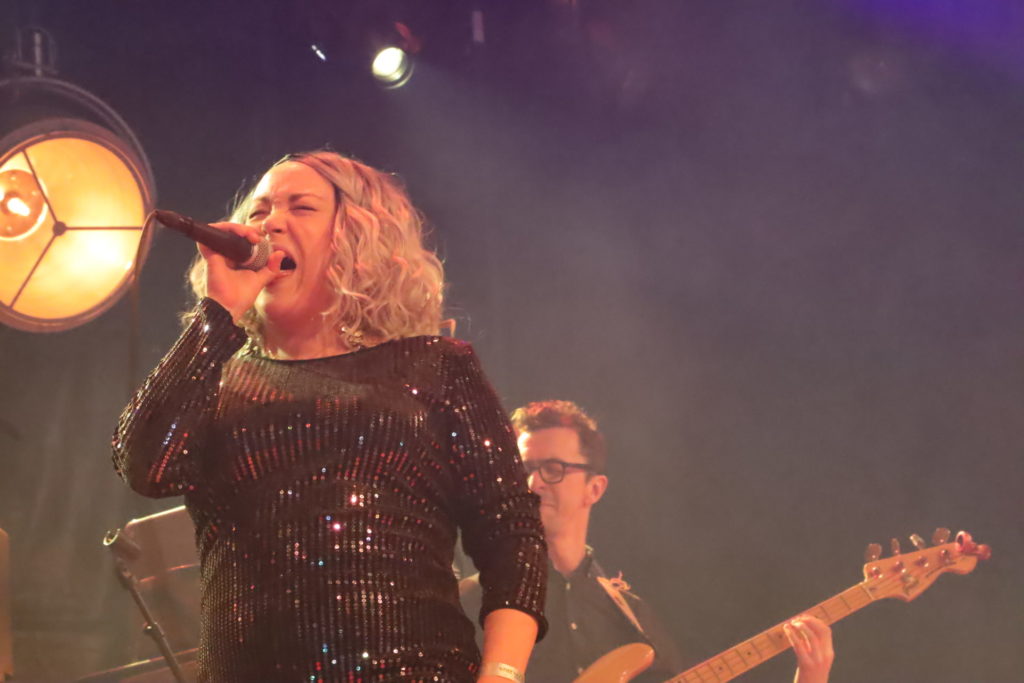 There was lots of variety in the set too, from stripped-down acoustic balladry to full-on showtime as Sam and the girls went into Tina Turner mode to close the set with effervescent renderings of Proud Mary and River Deep, Mountain High. This earned a rapturous reception and demands for encores.

So, with the day positively launched, we looked forward to seeing some old-school rockin’ Chicago blues from Studebaker John, making a return trip to Ospel after a short gap of only 27 years! Influenced at an early age by the street performers of Maxwell Street his native Chicago, John vividly brought the sounds of the Chicago street back to life with artists the likes of Elmore James and Hound Dog Taylor there in spirit. 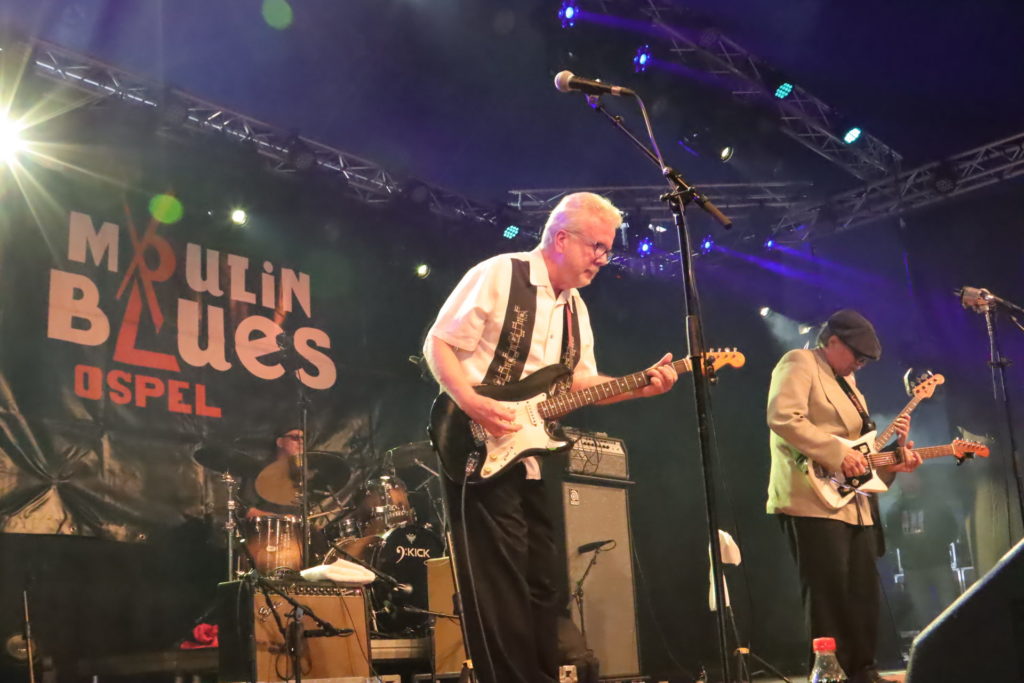 Next, we took a brief glimpse of Eric Lindell rocking the main stage in a cowboy hat and double denim, rootsy and mellow country blues and ballads, while over at the Cafe stage, we catch London regular Big Joe Louis accompanied by Lewis Fielding and Peter Greatorex. Big Joe has a fantastically distinctive, rounded vocal (perhaps influenced by his birthplace, Jamaica) and a strong rhythmic style in his guitar playing which gives a unique feel to his original material. Joe gained a well-earned, warm reception from the Cafe audience.

Then it was the first of two big all-star bands for the night, The Proven Ones, with vocalist Brian Templeton fronting the multiple talents of Kid Ramos and Anthony Geraci, driven by a powerhouse rhythm section in Willie Campbell and the legendary Jimi Bott on drums. In addition to this powerful group, rounding out the sound we had the horns of Joe Macarty and Chris Mercer.

Collectively the outfit has won more awards than you could comfortably carry but were not resting on their past achievements. They projected a breathtakingly big sound that seemed to extend past the boundaries of the tent, and with Kid Ramos laying down some powerful soulful solos in the opening numbers, we were transported into a magic bubble somewhere in the blues universe.

Ringing the changes after the opening segment, Geraci used his Hammond BE to take the mood gently back to earth, laying down a sweet and mellow groove for Ramos to pick up on in Fenton Robinson’s “Somebody Loan Me a Dime”. Having regained our composure after the intensity of the beginning of the show, the mood and tempo were uplifted once more with further Ramos razzamatazz and a lively B.B. King’s vintage “I’m in Love”. Closing the show with the title track from their 2018 “Wild Again” album, as their name suggests, these guys have nothing to prove!

Next up, Mike Zito moved the compass in a Southerly direction. Albert Castiglia guest Telecaster vs Les Paul?

Finally, the second of the all-star performers came on to wind up the festival in giant style – The Blues Giants style to be exact. Once more featuring the talents of Jimi Bott and Willie Campbell in the engine room, up front on vocals this time was the larger than life figure of the heavyweight champion of the blues, the incomparable Sugaray Rayford, amply assisted by Albert Castiglia and Nick Schnebelen on guitars. 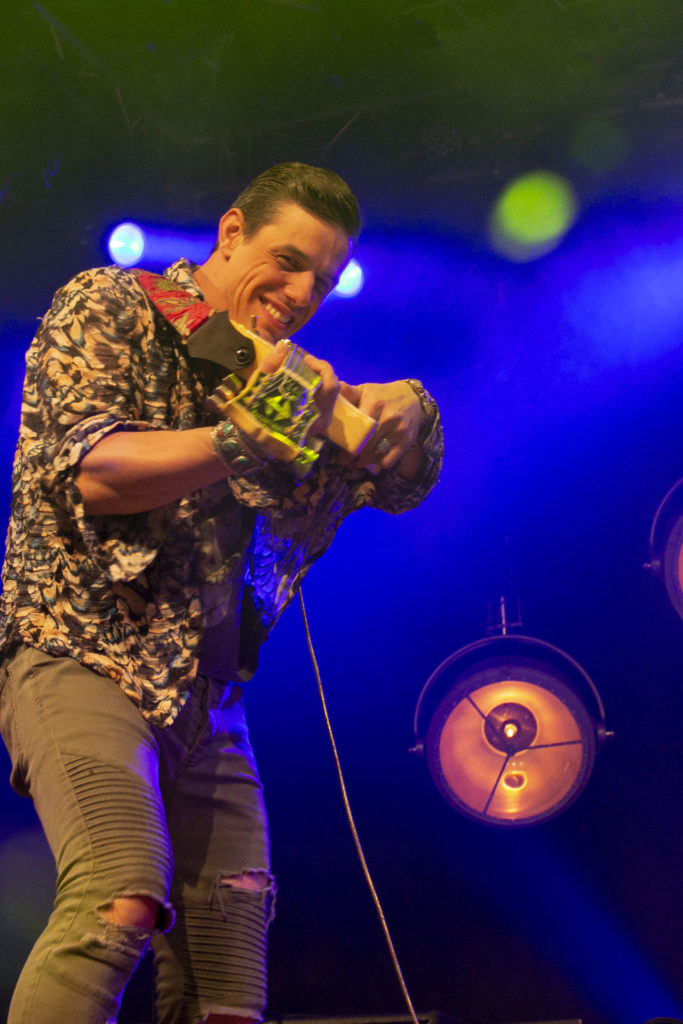 If you could bottle the energy that Sugaray and the band were throwing off, you could ditch those fossil fuels right now! Straight off the bat, Sugaray is engaging the crowd to clap and stamp along while he entices us to “Rub My Back” while throwing all kinds of funky shapes.

Not to be left out, Albert Castiglia takes the vocals on a riff-heavy 12-bar “Woman, Don’t Lie”, Nick swinging his guitar behind his head and generally having fun, goofing around all over the stage, Sugaray and the rest grinning for ear to ear in an outbreak of infectious humour. 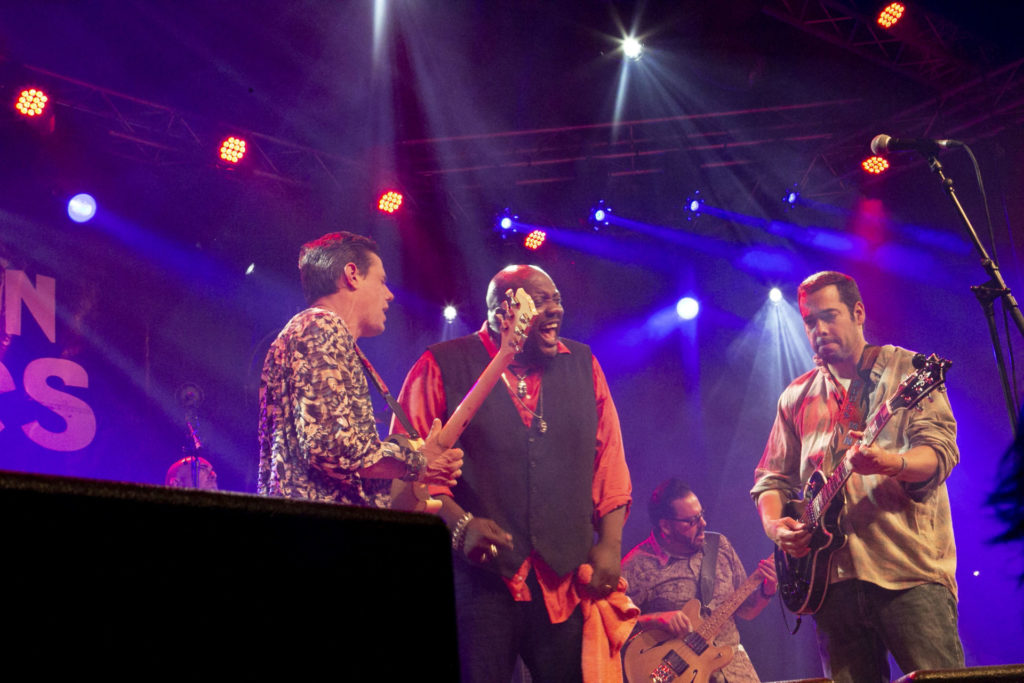 Nick gets to step forward with a couple of his own tracks from recent album “Crazy All My Myself” and Sugaray looks like the cat that found the cream. After a break midway to get the Ospel audience competing with the other audiences on the tour for the title of loudest singers, the action swings back in with a guest spot from Brian Templeton, a rip-roaring rendition for Free’s “The Hunter” and ultimately a tidal wave of sound as Freddie King’s “Going Down” brings the house down and the festival to a conclusion. 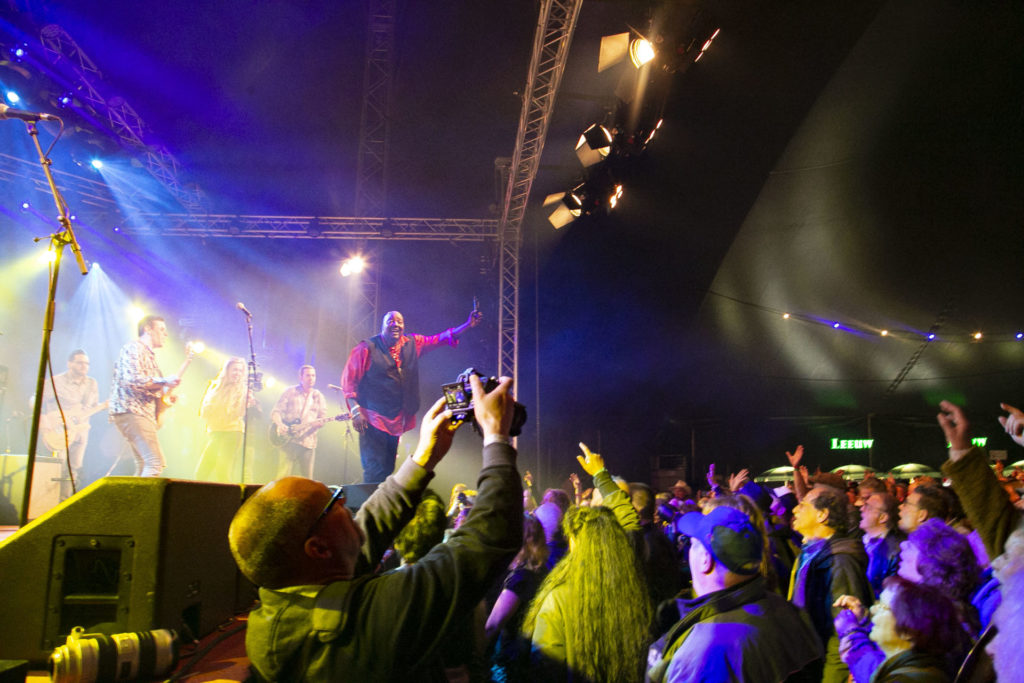 A truly fitting climax to two days of excellent, uplifting performances in a pretty, rural setting with decent facilities and organisation – It’s easy to see why Moulin Blues has been around so long and looks set for many years to come.