MARK HARRISON The World Outside

MARK HARRISON The World Outside 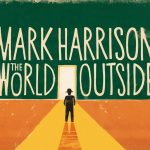 The World Outside, captures you from the first note with it’s fun rootsy beat, you know this is an album you are going to enjoy and listen to long after the review is written. This self-released album is full of confidence, with a dozen songs written by Mark. The band is loving what they are playing Charles Benfield (double bass, vocals), Will Greener (harmonica, vocals), Josienne Clarke (vocals, sax, flute,) Ben Walker (mandolin, vocals), Ed Hopwood (drums, percussion), Guy Bennett (keys, vocals), Sonny (bass, vocal) and Mark Harrison (Lead vocals). This album is full of bluesy roots textures and tones, lovely finger picking guitars, drawling vocals, percussion that drives the beat along and the overlaying superlative playing of a variety of instruments especially the mandolin delivered by Ben. Throughout there are overtones and a nodding of styles to Dylan, Honeyboy Edwards and more as they fleet on by and you are then back with an original sound that is put together with class and cohesion. Amongst these twelve strong tracks I love the country feel of Long Long Way To Go; the beautiful guitar intro that makes this track stand out, followed by the lyrics that flow as you watch the world go by. Josienne’s vocals are wonderful whether as a backing that adds depth or taking the lead. Not Alright, a folksy bluesy number where the slide guitar is used to great effect with harmonies to enhance this emotional track. The tempo never stays in one place every track takes a different approach to singing and playing roots music so the album is full of contrasts, as the mix of instrumentations are changed so that nothing overwhelms the song-writing skills of Mark Harrison. The World Outside is an authentic roots based album where it is the words that drive the instrumentation so the story shines through, as demonstrated on the final track Hard Times; a tribute to the superb early blues artist Honeyboy Edwards with a great mix of blues-harp and Hammond organ. Mark and the band have put together an album that is full of rhythm, emotions and above all fantastic skills on every instrument played with the vocals always centre stage, I love the mix of styles and approaches there is no doubt that angelic voice of Josienne combined with her skills on flute and saxophone gives the album something special that makes it stand out from the crowd. A special roots album that provides a great listening experience.