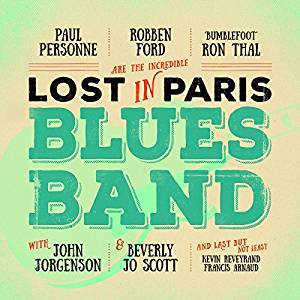 Chuck a bunch of accomplished and compatible blues musos in a studio in Paris and what do you get?

A collection of recordings like this. These are versions of mostly well-known songs by those who know how to play them.

A French rhythm section provides some cohesion in the form of bassist Kevin Reveyrand and drummer Francis Arnaud.

We surely have heard enough takes of Little Red Rooster and I Can’t Hold Out but at least they have spared us Need Your Love So Bad.

The better cuts include a wah-ridden and organ-chug version of Tom Waits Downtown. Sounds very Paris!

Bob Seger’s rocking Fire Down Below given a Stones setting and male-female duet and a stealthy I Don’t Need No Doctor.

A pure jazz treatment of Evil Gal Blues has a midnight ambience and lovely drumming, co-writer Lionel Hampton would be smiling down from above.

Hardly essential listening but a quality session that flows well and happily displays no ego-tripping in the performances.