KERN PRATT – Greenville Ms, …What About You? 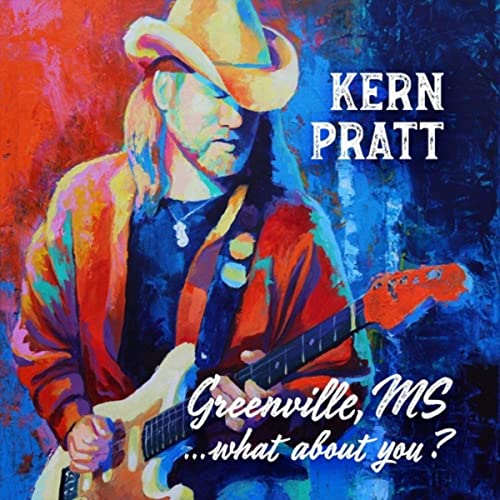 Album Review for Kern Pratt – Greenville MS, …What About You? – Released on Endless Blues Records.

With more than sixteen musicians playing on the 10 songs on the album, there is a mismatch of styles and no real musical cohesion, but it is still an excellent and largely upbeat collection of blues songs.

With three originals supplied by guitarist and singer Kern Pratt, with opener Loving That Feeling being an upbeat funk piece, with plenty of slide guitar and Hammond organ supporting the soul in his voice.

Baby’s Got Another Lover is a slow blues song, with a clean guitar taking in chromatic jazz ideas. Torn Between Love and Hate is a slow-paced song that owes a massive debt to The Thrill is Gone.

Although the songs are all well-produced, the differences in the studio musicians used means that the music is not as distinctive as it could have been. A band often has a distinct musical personality, fused by a small group of musicians working together to make the songs work, and although that is missing from this album, it doesn’t really distract from the quality of the release.

LEONARD COHEN'S Thanks For The Dance
The promo video for the title track from Leonard Cohen’...
SUGARAY RAYFORD Somebody Save Me
Sugaray Rayford Brings Vintage Soul Vibe To New Album. ...
JOE BONAMASSA & TOBY LEE at The Royal Albert Hall, London
The UK's teenage gui...
New album from Kirk Fletcher out this September
Former guitarist with the Fabulous Thunderbirds, and aw...