DENNIS SIGGERY & NEIL SADLER – Half & Half 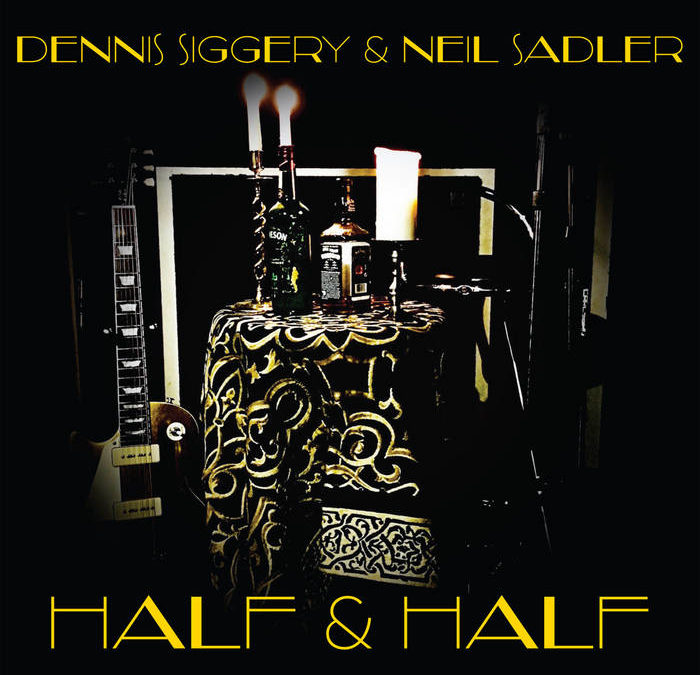 Album Review for Dennis Siggery & Neil Sadler – Half & Half – Released via Southside Music.

Dennis and Neil have a history of working together going back many years mostly on several Eric Street Band releases. Anyone familiar with that band will know that Dennis has a distinctive style of delivery and that he writes songs that are from the heart, often based on experiences and sung with honesty and integrity.

Inspired by a bout of ill health Dennis wrote the words to opener Don’t Want Your Tears and once Neil had added and arranged the music the album took on a life of its own. The original plan was to have half originals and half covers that meant something special to Dennis, but the writing got so good that in the end there was only room for four covers.

Don’t Want Your Tears is a bold statement of intent coming in at 9 minutes plus, a wistful atmospheric intro with Dennis vocalising into words that in his heart he is a musician by choice and wouldn’t have led his life any other way despite the knocks and setbacks.

Voodoo Woman bursts out of speakers next, with a lovely Southern rock feel, pinned down by Ed Sterling and Matt Edwards on bass and drums.

The Cat Done Got My Tongue is one of my favourites, I’m sure all us guys have got tongue-tied in the presence of beauty at some time. Next, is first of the covers, Little Red Rooster. This more akin to the original with a New Orleans style piano provided by Francisco Talabartaro adding some Louisiana flavouring, tasty.

Unchain My Heart has another atmospheric intro that drifts behind the drums and vocals. A tale of lost love originally recorded by Ray Charles that draws you into the story. Money Can’t Buy Me is another great song, who can fail to smile at lines like, “I buy my clothes on the Old Kent Road, I don’t like the look of Saville Row.”

Handbags and Gladrags wasn’t a cover I would’ve expected but the boys make it their own and it fits perfectly into the theme running through the album. It’s Gonna Rock Your Soul is an original that was inspired by B.B. Kings Rock Me Baby.

The album closes with Knocking On Heavens Door with an added final verse by Dennis after he heard this played at a friend’s funeral and felt something extra needed to be said.

I can’t recommend this highly enough, great songs well played and produced from the heart. No half measures here.