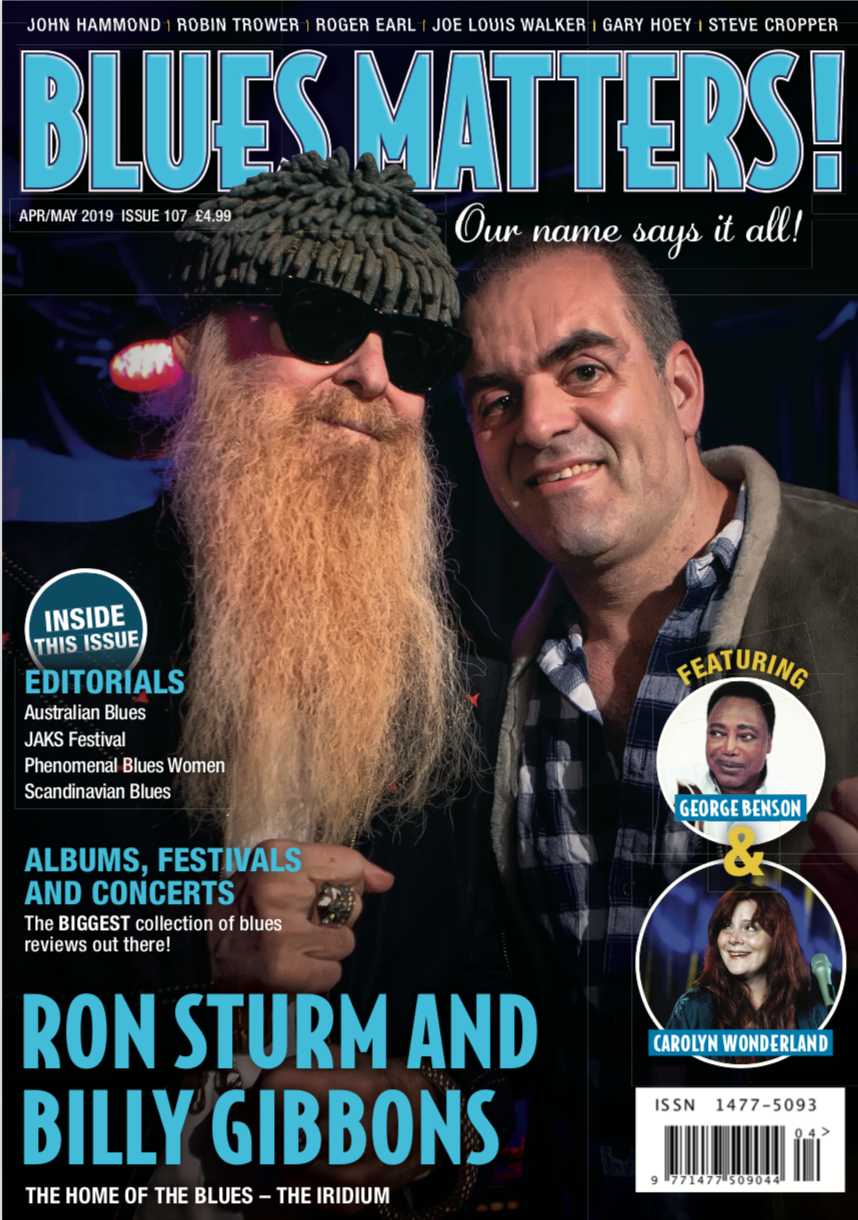 Highlights in Issue 107 are…

Carolyn Wonderland is the real deal, a red-hot Texan singer-songwriter who sings with the passion of Janis Joplin and plays the guitar with the mastery of Stevie Ray Vaughan.

Here she catches up with us to talk about being the first lady to break the John Mayall mould and join the Bluesbreakers.

US guitar ace Gary Hoey talks about his latest self-produced album Neon Blues Highway which is out on Provogue Records and features guest performances from artists such as Eric Gales, Josh Smith and Lance Lopez.

We also hear about his songwriting process, playing with his son, his musical influences and more.George Benson at the age of seventy-five, George Benson has spent a lifetime as an influential musician. He has recorded and toured the world, and has just released a new blues album, Walking To New Orleans, his first release for six years.

The album is a tribute to Fats Domino and Chuck Berry, and George is as excited as ever to discuss his new album. We discuss his long career, the highlights, his motivations, and working with legendary rock and metal (and blues!) producer Kevin Shirley.Joe Louis Walker has released 23 albums since 1986 for labels as varied as Alligator, Telarc, Evidence, and Provogue. He’s won one Grammy, been nominated for 52 Blues Music Awards and won 4.

He has just released Journey to The Heart of The Blues with pianist Bruce Katz and harp player Giles Robson, this acoustic album features fresh renditions of rare and classic blues numbers by Sonny Boy Williamson, Blind Willie McTell and more.Italian Blues troubadour Mike Sponza catches up with us to discuss his latest album, Made In The Sixties, which is out on Epops Music and features an impressive gaggle of guests.

He could not have chosen a recording studio more evocative of the ’60s, than the legendary Abbey Road in London.

Did he invoke the spirit of legends gone before him, you’ll have to read the article to find out what he said.

We also had an exciting opportunity to sit down with Ron Sturm, owner and manager of the legendary New York City music club The Iridium.

Originally known as a jazz club where Les Paul would play a Monday night residency for many years, in recent times they have evolved by adding blues and even rock performers to their schedule.

Ron discusses this interesting and iconic venue and talks about the many, many amazing artists who have performed here over the years. Ron and Billy Gibbons are featured on the cover of this edition of Blues Matters.

At The Iridium we also catch up with our cover artist, ZZ Top guitarist and lead singer Billy Gibbons where he chats about being taught to play the guitar by Jimi Hendrix and working with Muddy Waters…and he tells us who his favourite guitarist is but you’ll have read the article to find out who he mentions. (and no it’s not Jimi!).

SAFEHOUSE Absolutely Live II Album Review
Safehouse - Absolutely Live II - Released Independently...
GEORGE BENSON Releases Give Me The Night (Live)
As an all-time icon and Grammy-winning giant, we have g...
DANI WILDE To Headline London's 100 Club May 28th 2019
When UK blueslady Dani Wilde was a kid she kicked off a...
THE TODD SHARPVILLE BAND & The Sharpville Show
Sharper Than Most by Iain Patience. With lockdown st...