Sand And Stone is the latest release to come from Chris Bevington Organisation and it’s due for release in May/June 2020. This will be the band’s 4th album in total and the 2nd to contain all original material. I recently visited Coal House Studios to have a chat with the singer-songwriting duo of the band, Scott Ralph and Jim Kirkpatrick to chat about the making of the album and blues in general.

How did you first become involved with Chris Bevington’s project?

JK. I’ve known Chris for years although I hadn’t seen him for a long time and he got in touch with me and said, I want to make a record. He hadn’t made a record up to that point and he said, he was 50, and wanted to make a record and would I play on a few songs and I said yeah, of course, I will. Initially, he asked me to just do a couple of tracks and probably said the same to you (Scott).

SR. Yeah it was exactly the same thing with me and it just kind of grew from there. We thought, well let’s get these tracks done and we had a great time doing it, Then we did a couple of gigs. But when you are setting up a band with 9 people and Chris was picking all the people, he wanted to work with people who were on the same page, so there was bound to be something interesting to come out of that. 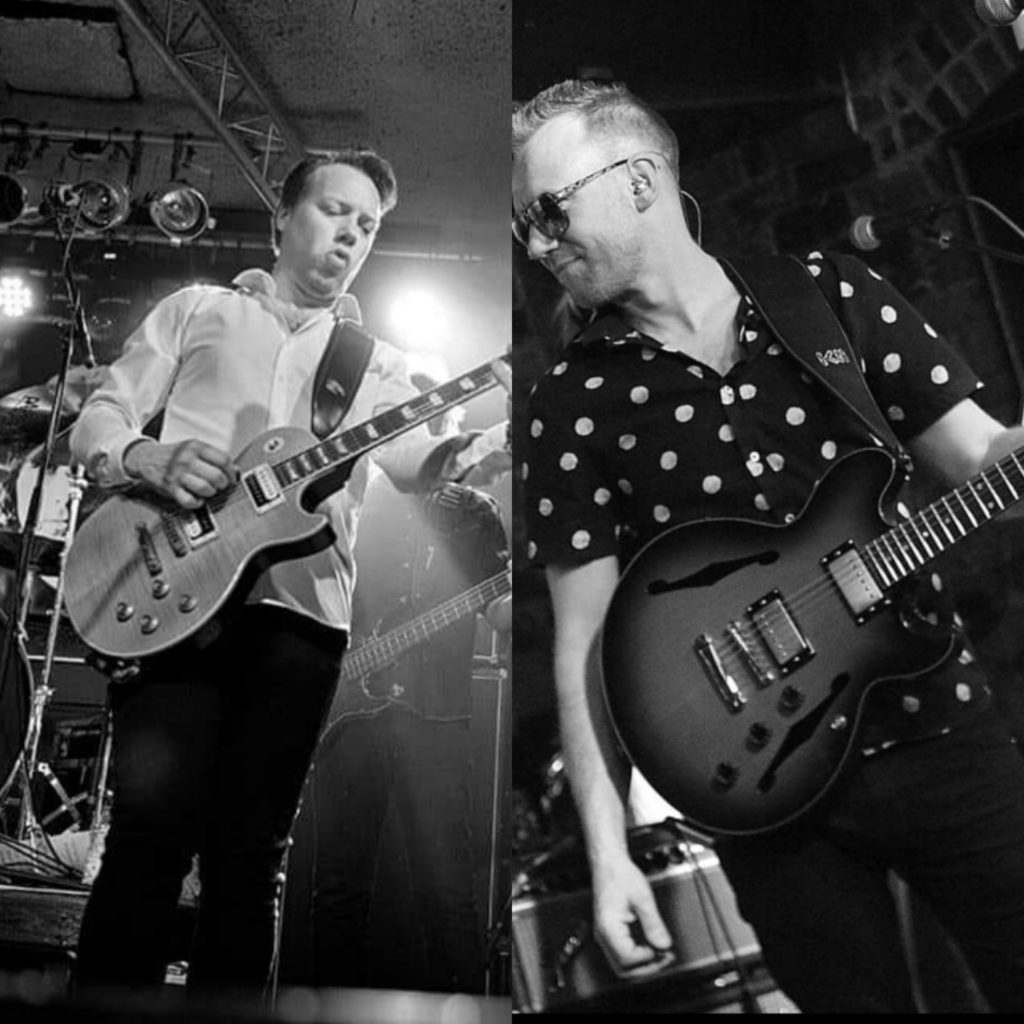 Was it difficult getting a nine-piece all together on the same page?

JK. Well, there were about 29 to start with because there were different drummers, so it wasn’t a solid line-up at first for the first album and I just turned up and thought I’d be playing on a couple of songs and I’d hear no more about it.

Well, you obviously enjoyed it because you are now on album 4 and it’s the 2nd one that you have written yourselves in its entirety of all original songs.

You revealed the other day that the new album was going to be called Sand And Stone. Where did that come from?

JK. I found this old book at a school that I was doing some work in and it’s signed by somebody that I can’t, unfortunately, read in 1932. They were chucking a load of old books out and told me if I wanted anything to just help myself. I thought it could be quite interesting because I’d had an idea about, not actually stealing people’s songs but getting ideas and titles because none of this is copyrighted it’s all just traditional stuff.

SR. It’s only taking themes and ideas from it.

JK. So we got a few ideas and one of them was like a negro spiritual, about working in the sand and stone. We had this idea which I’m not totally sure we pulled off with the last album because I’d been listening to a lot of Derek and the Dominoes and Delany & Bonnie and I wanted to make it a bit like that and we kind of succeeded with that. And, I wanted to make this one more of a gospel album. It’s not finished yet so it’s difficult to say if we’ve pulled it off but on some of it we’ve definitely got it down.

What’s been the process for working on the new album with the 2 of you being the writers?

SR. Well, it’s the same as before really.

SR. I have to have a thread so that we have some level of continuity. We tend to find what works and sort of stick with that. It works really well for us. It’s almost like falling off a log really.

Is that because you know the band so well and how it will all fit together?

JK. Partly, because you can try writing with some people and it just doesn’t work or you don’t find a formula. We get sort of get a rough idea about what we want to do and then it’s bang, we’re off and running.

I put this question to Chris when I did the first part of the new album interview with him. Have you ever considered recording live with the whole band in the studio together?

JK. It’s logistically a bit of a nightmare, to be honest.

SR. What that would require is a lot of downtime for everyone because you would have to spend a week with it because doing it live and doing it in the studio are two different animals. You would have to get nine members to take a week off work all at the same time.

JK. I’ve not really discussed this with Scott, but I said to you Steve the last time I saw you that I’m already thinking about the next album and because we are established enough that on the next album we could do a straight-out blues album. And it would be nice to do it live, but again, it would be a logistical nightmare, but never say never.

What were your first introductions to blues music?

SR. My dad. We would have Sunday dinner listening to Eric Clapton or Cream. But also, Robert Johnson. It was very eclectic. He would play everything to us right from the time that I was born there was always blues music being played.

JK. For me, you kind of discover stuff and then go back and see who influenced them. So, for me it was Brian May. Who influenced him? Jimi Hendrix. And once I got into Jimi Hendrix that opened up everything for me. People don’t realize that two-thirds of Jimi’s recorded material was based on blues and blues progressions. My dad was a massive Elvis fan and a certain amount of that is quite bluesy if you get away from the hits, all of it was blues really

Where do you see the band going in the future?

JK. I’d quite like to do a straight blues album next time but I suppose it’s up to Chris really. Having said that he’s usually pretty happy to let us lead that.

SR. I always like to think that something is going to progress and grow, creatively, technically as a thing. I think if you just stay the same it will either go stale or it will just stop. When you look at the best most successful artists who have had long careers it’s because they keep on reinventing themselves. I’d like to think as the future presses on we will shapeshift a bit and change a little bit and try new things.

JK. Yeah, that as well. Both of them are really good to play live.

Well, thanks so much for taking time out of your busy schedule to have a chat with me. It’s been a real pleasure for me.

SR. JK. It’s been a pleasure for us as well.

To read a previous interview with Chris Bevington click here

The Thrill Is Gone – B B King

Please Accept My Love – B B King