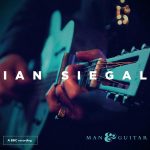 This album is a sort of Saul and the Road to Damascus scenario for me! I am truly struck by this man and his guitar. Between them they’ve created a blues record which is unbelievably produced not by a gnarled worker in the plantations of the Deep South, but by an Englishman in the Royal Albert Hall the home of the promenade concerts! Silver Spurs opens the performance at a speed that indicates the spurs were sharp as a tack when they were dug into the rump of the music. Siegal has a voice which has been lived in, and if not to excess, then damned close to the edge. Mortal Coil Shuffle has lyrics which have been written with feeling, if not livelihood experience. Throughout this album Siegal bares his soul in both word and guitar playing! Both of which he lets rip with unadulterated raw, visceral feeling. This production has also restored my faith in The Beeb as a national institution too since they’re party to this absolute gem! Tain’t Nobody’s Business is a lyrical master class sung at breakneck speed with vocal contortions to defy sound engineers knowledge and was probably the cream in this truly vintage crop of Blues!