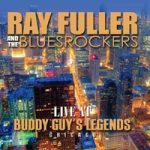 Twelve tracks, with 6 covers here, recorded live at the Chicago club of Buddy Guy. Ray Fuller is apparently the Saturday night regular here, and he certainly shows off his familiarity with the place as he proceeds to tear up the stage! A cover of Boom Boom is pretty good, (but I have to confess that I prefer the Original Animals version) Love & Alcohol has a heavy Bo Diddley sound then there is a superb 8 plus minute version of Otis Rush’s So Many Roads with some wicked guitar work Feelin’ Evil is as threatening as it sounds with some great Bass and lead work. Although this is a live recording, the music is very much to the fore, and there is only a little audience reaction allowed into the mix, but despite that, there is an electric feel to the sound that brings the atmosphere across. Now where was that United Airlines leaflet, I need to get to Chicago!