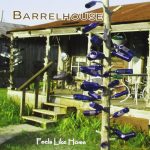 Barrelhouse is Kevin Burke, an acoustic guitarist of no small talent and a singer with a pleasant if not remarkable voice. He sings songs that make sense – the title song is full of descriptions of his home and what makes him feel as though he is at home – and on the next track You Never Listen the lyrics describe a diatribe between husband and wife. His picking is excellent but he plays guitar as a support to his songs rather than as a feature in its own right and you are always thrown back on his less than powerful vocal style. When he does play an instrumental as he did on The Cadillac his playing definitely grabs the ear and gets your feet tapping along. I didn’t dislike the album, rather it was a fine late night listen, but it isn’t anything new or classic: he isn’t any Bob Dylan and nor is he a Ry Cooder who can grab you with one note and have your attention for hours. There are a number of Brits who I would rather be listening to – Garry Smith or Mark Harrison for two and when you add the likes of Samuel James to the mix there are a lot of very good singer/guitarists he is competing against. Sorry Mr Burke to damn with faint praise but this is ok but not great and there are a lot of great players out there.

R.I.P. CHARLIE BATY
One of the Blues world's greatest guitarists Charlie Ba...
Coronavirus And The Impact On Musicians
HOW THE PANDEMIC IS AFFECTING MUSICIANS With loads o...
An Essential British Blues Double Bill
STAN WEBB'S CHICKEN SHACK join SAVOY BROWN for an essen...
KING KING UK Tour Rescheduled For 2021
King King are finally back on tour again. The Glaswegia...