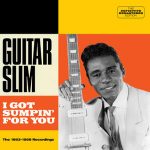 Guitar Slim was born Edward Jones in Mississippi in 1926 but throughout his short life Eddie was known by the stage name of Guitar Slim although just to confuse matters he was not alone in using this name during the period, this CD package highlights recordings during the peak of his career made for the Speciality and Atco labels, the original twenty eight tracks have been re-mastered and appear together for the first time on CD. Guitar Slim was a passionate R&B artists who really threw himself into his performances with energetic vocals and at times distorted electric guitar that would later be picked by Jimi Hendrix to great effect a decade later, the track The Cackle is a prime example with its guitar created clicking “cackle” sound. Guitar Slim had a major hit on the US R&B charts staying at number one for six weeks with The Things That I Used To Do, a track that had Ray Charles providing backing on piano; this track is included along with several others that include the fledgling Ray Charles. Guitar slim was not just a player he wrote the majority of the material on the this release which has a running time of nearly seventy minutes and captures an artist who while not achieving true greatness, was an innovator, pushing the R&B barriers towards Rock and Blues