GIULIA MILLANTA Conversation With A Ghost 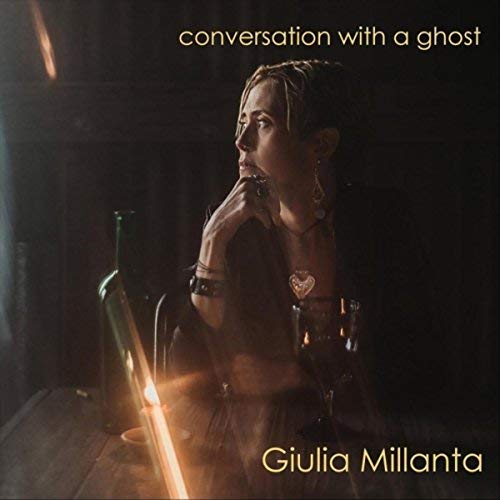 CONVERSATION WITH A GHOST

This is the sixth album release by Giulia. A very thought-provoking album that is so dependent on the message conveyed through the lyrics.

The opening track Blinded by The Sun is melancholy, to say the least, but keeping within the inner workings of the mind in dealing with loss and despair it really is a great opener.

Puppet on A String definitely has a Latin feel given that Millanta is native Italian. The lyrics once again at the forefront of your mind but also with great guitar work from Marc Ribot.

Yes, this album is primarily mostly about thought-provoking lyrics and how one deals with inner demons and troubles but please don’t underestimate this fine group of musicians.

Such as the magnificent classical guitar of David Pulkingham on Lila (spread your arms).

Violence along with great accordion playing tells a story not normally associated with the blues. However, it certainly works on a great level.

The title track Conversation with a Ghost is very soul-searching and touching. Arguably the best track on the album, it leaves you with an eerie feeling of sadness and loss but not despair and that for me is the message trying to be conveyed through very clever lyrics.

Enough is Enough is by far the most upbeat song on the album, it really shows this fine group of musicians in a most wonderful light.

Gabriel Rhodes is a stalwart throughout the whole album, as well as contributing lyrically to a couple of numbers he also has fantastic musical knowledge judging by the number of instruments he plays on here.

The final track Space is a really nice ending to a very different kind of album.

Giulia Millanta is an extremely talented lady with a gift for lyrics and arrangement second to none.

With these musicians, she will be around for a long time to come.