FREDDY KING Freddy Sings / Let’s Hide Away And Dance Away

FREDDY KING Freddy Sings / Let’s Hide Away And Dance Away 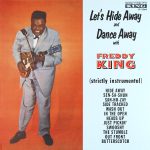 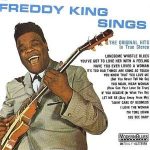 The first two albums by Freddy (he changed to Freddie during the middle part of the sixties) were originally released in nineteen sixty-one and sadly had been unavailable for quite some time but, now they have both been made available in a re-mastered single CD edition from Soul Jam Records. Freddy Sings, contains a wonderful array of Classic numbers such as; See, See Baby, which reeks of fifties Chicago Blues with its lone pickin’ guitar, trilling piano, mellow honking and swinging saxophones. The swaying, haunting chorus on Lonesome Whistle Blues is chillingly backed not only by Freddy’s imaginative T Bone Walker guitar work but, with his sweetly pain ridden and desperate wailing vocals. The merging of Freddy’s natural Texan guitar skills with his imported Chicago influences only adds to his nuanced playing and is highlighted on the slow burning Have You Ever Loved A Woman, his almost crying vocals paired with his trailing, wailing guitar work are pure magic. These albums were recorded in an eleven month period yet; a kind of metamorphosis has taken place, from classic to modern in one smooth move for there is certainly no doubt in my mind that LHA a DA is the sole starting point from which many guitarists have based their styles upon for all the modern and accepted hooks, riffs and tunes are already there, laid out just waiting to be picked up and re-arranged, speeded-up, slowed down and generally rehashed and re-born for each coming era. It is refreshing and pleasing to hear the familiar, fluid and resonating strains of Hide Away, The Stumble, Sen-Sa-Shun, San Ho Zay and Side Tracked performed with the vim, vigour and complete relaxed artistry of their originator, in the manner for which they were written. Three cracking bonus numbers include a shuffler in Come On; with Freddy’s vocals matching the honking saxophones and guitar. Texas Oil, is a saxophone honking, ringing, twangin’ guitar stomper as is Sittin’ On The Boat Dock. Essential!