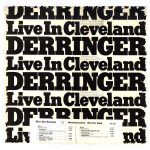 It’s September 1978, and we’re in Cleveland’s premier rock venue, the smoky, boozy Agora Club. For those of you not au fait with the Derringer legend, you have to go back to the mid-1960s and a band called The McCoys, responsible for that perennial hit, Hang on Sloopy. In their ranks were brothers Randy (drums) and Rick Zehringer, Rick being a guitarist, composer and vocalist of prodigious talent. Thus they became, eventually, Derringer (easier to pronounce), and like the fabled gun of the same name, they don’t fire blanks. Within a decade of 60s chartdom, they evolved into this terrific live act with Kenny Aaronson, bass, Vinny Appice, drums, Danny Johnson, guitar and, of course, at the well-gripped helm, Rick Derringer. This double live album, if you’re into high-octane speed rock, will totally wear you out. It’s an air guitarist’s dream, and if you try and listen to the incredibly talented axe-twiddling on the track Beyond The Universe after consuming too much beer, you may end up needing mouth to mouth resuscitation. The crowd are loving it, and there’s some nice surprises, like a fine reading of Bowie’s Rebel Rebel, and the absolutely hair-raising Rock & Roll Hoochie Koo.

At fifteen tracks spread over two CDs, this nicely packaged souvenir, with very informative liner notes by Alan Robinson, provides an excellent evening’s entertainment. It’s loud, hot, fast and in your face classic blues rock, and fires all the bullets you’d expect from a fully-loaded Derringer. I need to sit down now in a quiet, darkened room.

ELLES BAILEY What's The Matter With You
Elles Bailey releases a brand new single, from her seco...
THE BISHOP'S BLUES
THE BISHOP RECOMMENDS 4 NEW SINGLES TO BEAT THOSE CORON...
REBECCA DOWNES Top 10 Blues
Birmingham, UK-based Rebecca Downes and her band are de...
Beth Hart Collaborates With Fans
Beth Hart Reveals Heartwarming Video for ‘No Place Like...