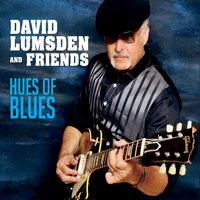 From the explosive opening track, Earl Hooker’s You Got To Lose with its scorching guitar work its clear that this is going to be a barnstorming romp through blues and rock classics reinterpreted by experienced journeyman and now bandleader, David Lumsden.

On an album which is essentially about covers, it is appropriate that Lumsden leads the way with an impressive rendition of Jeff Beck’s Brush With The Blues which was recorded live. Lumsden also trades slick guitar licks and shares vocals with Illinois blues veteran Bill Evans on Further On Up The Road.

Chicago guitarist Andon Davis delivers soulful slide on the Led Zeppelin classic Rain Song. One of the many highlights is the band’s zany take on Memphis Minnie’s What’s The Matter With The Mill, Mehlberg’s harp and Ezra’ Casey’s keys enhancing the jaunty honky-tonk vibe.

Another stand out track is Cut You Loose with some of the best blues harp and vocals you will hear from the other side of the Pond, courtesy of Steve ‘The Harp” Mehlberg.

Elsewhere, Wayne Carter excels vocally on You’re Ruining My Bad Reputation, The Thrill Is Gone and Georgia On My Mind as he rejoins his old pal Lumsden after years on the road with his own band the Organ Twisters.

However, the outstanding track is the autobiographical tale of a wild child, Raised Me Right featuring the ‘powerhouse blues lady” Mary Jo Curry who oozes class, sass and panache.

The beauty of this album is its energy, rawness, spontaneity spirit and lack of pretention. It sounds like a group of friends who happen to be very good musicians just playing and enjoying the blues that they love.