DAVE GOODMAN No Rest For The Wicked

DAVE GOODMAN No Rest For The Wicked 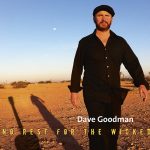 Upon first listen to the opening track Nothin’ But Bad, I couldn’t help but think as my heart sank, that this was a cross somewhere between Ralph McTell and Pete Seeger. Acoustic guitar, banjo and a distinct Folk feel to that song. My feeling changed completely when I realised what the second acoustic track was. Manic Depression/ 3rd Stone From The Sun, all done on acoustic guitar with Oliver Spanuth on brushes. What however is more impressive is the arrangement of one of Hendrix’s most powerful songs. No doubt as a guitarist Goodman appreciates Hendrix, but here I suspect he appreciates the song writing more and is able to interpret them into his world and medium. There is even a song called Little Jimi (For Rebecca Voge) which is an instrumental in which he demonstrates his prowess to good effect. Two other Hendrix songs feature here, The Wind Cries Mary, which maintains its’ haunting feel via the body vibration of the guitar itself. Listen particularly to the short guitar solo for there is some great fret work happening there. Little Wing is also a great rendition, giving the song a totally different feel to the original. His own songs are not without merit however. Can’t Let Go has a great swagger to its rhythm, and Spanuth, his only other musician on the album, on very muted percussion. Luana, is an instrumental that has a certain Django Rheinhardt feel to it, with an off centre jazz element. Danny Boy, written by Frederic Weatherly (formerly a son of my own town of Portishead) is also featured, but sadly it’s probably the weakest song here. Goodman originated in Canada, moved to California and is now resident in Germany, and his music reflects the influences that have moved him over the years. Si Bheag Si Mhor could be a Gaelic Country song for all I know, but it sounds delightful nevertheless. Folk, Blues and more, he covers it all and fans of acoustic music should enjoy this album