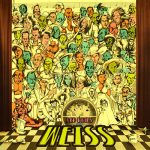 There’s no doubt Mr Weiss’s name is more famous than his music, he can thank Rickie Lee Jones for that courtesy of her hit Chuck E’s In Love way back in 1979. Also, there’s the fact that Weiss has not been exactly prolific, releasing only five albums since 1981. The cover is his own take on the Sgt Pepper one, some sixty faces to guess. The cd itself is not bad at all, co-produced as it is by Tom Waits and Johnny Depp, the latter featuring on guitar. Long-time band members, drummer Don Heffington and guitarist Tony Gilkyson are a couple of the many musicians on here. Tupelo Joe is about an upright bass sax player, Sugar Cane Harris, from a band called Texas Chain Sex Band. Shushie refers to a feral cat Weiss is looking after. Boston Blackie was the friend to people who had no friends Weiss recalls watching on TV when he was a kid. That Knucklehead Stuff reflects his real love for funky music. Bomb The Tracks has poignancy about it, asking why the Allies didn’t do something to stop the trains taking Jews to the death camps. Exile On Main Street Blues apparently came from a radio advert for the Stones Exile album. Dead Man’s Shoes says refers to what it says on the tin, really. Two days after a local wino died Weiss spotted his shoes in a cobblers shop, bought them and gave them to Gilkyson. If you haven’t guessed already, Weiss is an acquired taste, but I have to say, given the morbidity of a lot of the tracks, musically it is second to none, dishing up a whole bunch of genres. Besides the aforementioned Depp, Heffington and Gilkyson, credit has to go to the following for their efforts, Will MacGregor/Steve Nelson/Bruce Witkin on bass, Cece Worrall-Rubin/Jimmy Roberts on sax, Janice Markham, violin, Michael Murphy, piano and lastly Mike Bolger on trumpet.