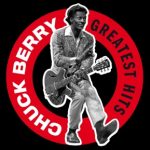 I first heard Chuck Berry in the early hours of one morning in 1957 as his pile-driving guitar cut through the static on Europe’s American Forces Network radio. At school later that day, the conversation buzzed around the yard. Jeesus! Did you hear that? What was it? He was, without doubt, Rock and Roll’s tsunami. Incredibly, aged 88, Chuck Berry is still out there performing. This year he’s played in Moscow, as well as a few dates in St. Louis. Knowing what can happen to your legs when your aging frame passes the R&B boogie barrier, if he’s still doing his famous duck walk I feel for him. John Lennon once famously quipped that if Rock ’n’ Roll had another name, it would be called Chuck Berry. He stands a giant head and shoulders over any of his contemporaries for numerous reasons, but mainly for his exquisite lyrical poetry, his guitar style and his showmanship. In many ways it seems a pointless exercise reviewing these 40 epic tracks. They are Rock ’n’ Roll’s granite monuments. To my generation, they still throb with the exotic excitement of musical discovery. They’re all here; Johnny B. Goode, Maybelline, Memphis, Sweet Little Sixteen, Little Queenie, Carol, as well as those equally famous yet less aired, such as La Juanda, Jo Jo Gunne and Havana Moon. Berry’s hard-driving style and charismatic performances are the very bedrock of the pop music culture we know today. Just think what the Beatles, the Stones, or the Quo would have been had Chuck not been around. Any post-50s rocker worth their name owes a stylistic debt to Berry. Keith Richards refers to the maestro as ‘rhythm man supreme’. If you’re young, new to the blues, and wonder what all the fuss is about, buy this excellent double album. I promise you it’ll be worth it. And think on. When NASA sent the Voyager spacecraft off to wander eternally through the universe, it was carrying a track by Chuck Berry. Immortal, indestructible music? Damn right it is.