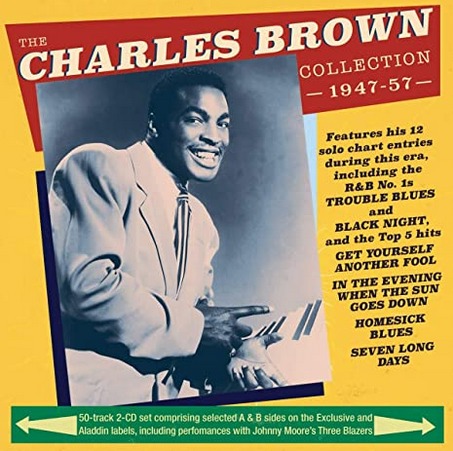 Perhaps my favourite blues track of all time is Have You Ever Loved A Woman, first recorded by Freddie King in 1960 and subsequently taken to the next level by Slowhand. It’s usually credited to songwriter Billy Myles. So, I was taken aback to hear Charles Brown’s 1950 recording Did You Ever Love A Woman on this 50-track two-CD set, which strongly suggests that the royalties should have gone to one Arnold Dwight Moore instead.

Also, of note is Cryin’ And Driftin’ Blues, a Brown original that emerges with only minor lyrical alterations in both the Clapton and Butterfield repertoires decades later as simply Driftin’ Blues. Texan-born vocalist and pianist Brown doesn’t have the posthumous reputation you would expect for a man who scored multiple R&B chart placings, including his hits with Johnny Moore’s Three Blazers, some of which are included here.

This mainly due to his heavily jazz-leaning supper club stylings that lack the cottonfield angst of the Delta shouters or the propulsive rhythms of Chess Records’ immortal output of the same period. It’s not all blues, by any means. Some of the sides are jazz standards and/or Eisenhower era pop.

But this music was box office in the racially integrated night clubs of west coast America after world war two, and even the likes of Ray Charles acknowledges his debt. Given that The Charles Brown Collection 1947-57 is a budget release, it’s worth listening to for blues archaeology purposes alone.