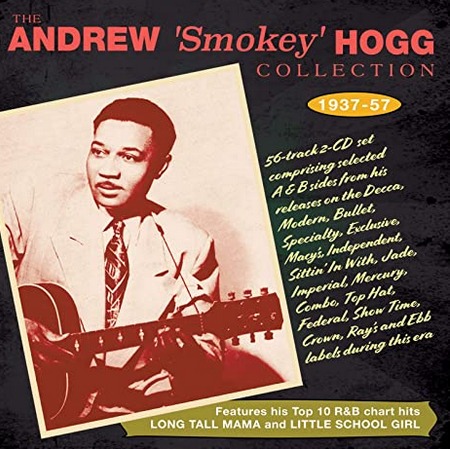 The career of Andrew ‘Smokey’ Hogg spanned two decades, and this two-CD set offers purchasers 56 of the 70 or so sides he is known to have cut for various labels. Arranged chronologically, you can hear how Hogg develops over the decades in question.

Born a Texas farm boy in 1914, his career commenced as an itinerant teenage entertainer, and his early work is basic country blues in much the same vein as fellow Texan Lightnin’ Hopkins, once rumoured to be a cousin, though he probably wasn’t.

Best of the immediate post-war songs are the risqué Too Many Drivers and the politically themed Unemployment Blues, recorded for a local label in Dallas, featuring just Hogg and his guitar. The tracks were leased to the Bihari brothers’ Model label in Los Angeles and sold well enough to win him an invite to LA, where he began recording with piano, bass, and drums.

By this stage, the influence of Big Bill Broonzy is increasingly apparent. Listen out as well for Hogg’s version of Sonny Boy Williamson’s Good Morning Little School Girl. As the 1950s progresses, the frequency of studio visits declines with the rise of rock and roll and come to a halt after 1957.

Quality is variable, and then-fashionable honking R&B horns don’t always work. But even by this time, the grittier lyrical subject matter on show in Patrol Wagon Blues and Penitentiary Blues Part 1 still hits home. Not an essential purchase, I guess, but an album that will likely interest many.