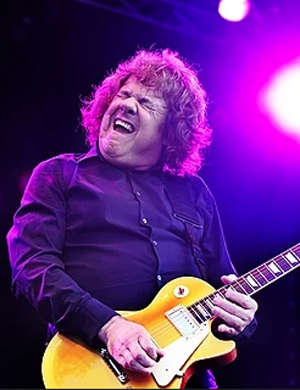 Robert William Gary Moore (4 April 1952 – 6 February 2011) was an Irish musician and songwriter. Over the course of his career he played in various groups and performed an eclectic range of music including blues, hard rock, heavy metal, and jazz fusion.

Influences include Peter Green and Eric Clapton, Moore began his career in the late 1960s when he joined Skid Row, with whom he released two albums. After Moore left the group he joined Thin Lizzy, featuring his former Skid Row bandmate and frequent collaborator Phil Lynott.

Moore began his solo career in the 1970s and achieved major success with 1978’s “Parisienne Walkways”, which is considered his signature song. During the 1980s, Moore transitioned into playing hard rock and heavy metal.

“one of the greatest guitarists of all time”

In 1990, he returnd to his roots with Still Got the Blues, which became the most successful album of his career.  Moore continued to release new music throughout his later career, collaborating with other artists from time to time. Moore died on 6 February 2011 from a heart attack while on holiday in Spain.

Moore was often described as a virtuoso and has been cited as an influence by many other guitar players. He was voted one of the greatest guitarists of all time on respective lists by Total Guitar and Louder. Irish singer-songwriter Bob Geldof said that “without question, [Moore] was one of the great Irish bluesmen”.