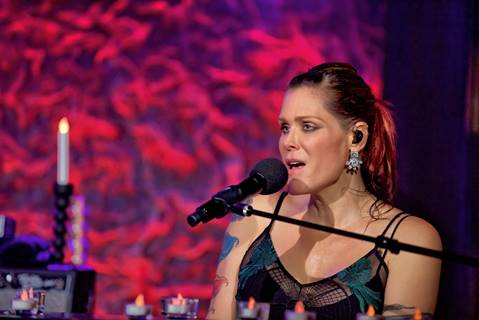 ‘Live From New York – Front & Center, was a very special, intimate concert at NYC’s Iridium Jazz Club, which featured songs from her latest album ‘Fire on the Floor’ and from throughout her career.

Here she reveals the incredible performance of the live favourite ‘Delcious Surprise’ taken from 1999’s ‘Screaming For My Supper’, which see’s Beth at her dynamic best.

The performance was recorded on March 7th, 2017 and also featured on the Season 8 premiere episode of Public Television’s critically acclaimed concert series, Front and Center.

Known for her visceral, soul-baring vocals and dynamic range, Hart is riding a creative tidal wave following the release of her critically acclaimed 2016 studio album, ‘Fire On The Floor,’ as well as her just-released studio collaboration with guitarist Joe Bonamassa, ‘Black Coffee.’

Levelling audiences with her incredible power and celebrated burnt-honey vocals for 20 years. Hart is halfway through her April-May 2018 UK tour playing sold out shows across the country finishing at the legendary Royal Albert Hall, London on 4th May, which sold out over a year in advance.

She then heads to mainland Europe for some shows including her largest headline show to date at the Ziggo Dome arena in Amsterdam, Netherlands, on 12th May.

‘Live From New York – Front And Center’ was released as a 2-disc DVD/CD set, mixed in 5.1, stereo, featuring never before seen bonus material, including an exclusive interview with Hart.

The audio from the performance will also be sold separately as a digital release.

Beth Hart finishes her UK tour on Friday evening and will then travel to Europe for the remaining dates.