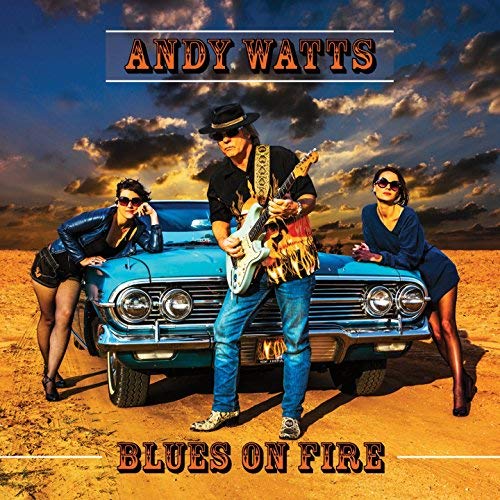 I’m familiar with Andy Watts as an outstanding guitarist with his regular band Blues Rebels, so I was very pleased to receive a copy of his solo album to review.

It would be easy to assume this might be a typical guitarists solo album from the title, and from the fact it contains half a dozen covers, some being instrumentals and by the similarity that Andy has to SRV on the cover image.

All of those assumptions absolutely do this fine release an injustice. What we have here is a collection of classy performances, tasteful guitar-man-ship throughout and superb production and arranging.

Opening instrumental Full Throttle sets the tone, a lovely jaunty tune with the unexpected brass section giving it a wonderful Texan feel, something that comes to the fore across the whole project.

Title track Blues On Fire follows with guest Joe Louis Walker nailing the vocals to the mast. Andy’s playing is subtle and understated allowing all the other instruments space to shine, and shine they do.

The Peter Green composition Looking For Somebody is up next. Vocals this time by the highly respected Ilan Hillel who’s interpretation reminds us of how great those early Fleetwood Mac albums still are.

The SRV instrumental Riviera Paradise is simply sublime, the addition of Gregory Rivkin’s trumpet taking it to a different dimension. Special mention for Eyal Klein on keys on this too, just perfect.

I really enjoyed Ron Young singing JJ Cale’s I Got The Same Old Blues, it reminded more of the Captain Beefheart version rather than the original, not a bad thing in my book, but once again Andy’s playing is tasteful and classy, more about feel and interpretation of the song than being flashy or overblown.

Next is Voodoo Chile, like many I think I’ve heard so many poor covers of the Hendrix classic to last a lifetime. Never fear, this isn’t one of those. An energetic vibrant delivery with Blues Rebels Dov Hammer delivering the vocals with aplomb.

The old Jericho Jones number Junkies, Monkies & Donkies from 1971 is then given the Andy Watts treatment with original singer Danny Shoshan proving he still has the chops. A slightly psychedelic feel but made to fit perfectly into the overall vibe.

The final track is another Hendrix cover Who Knows. Treated respectfully and Rivkin’s trumpet again adding something new to the mix.

This is certainly an album I’ll be returning to often and hats off to Andy Watts for creating a situation where so many top-quality musicians can shine and for avoiding so many potential pitfalls in such a classy way.