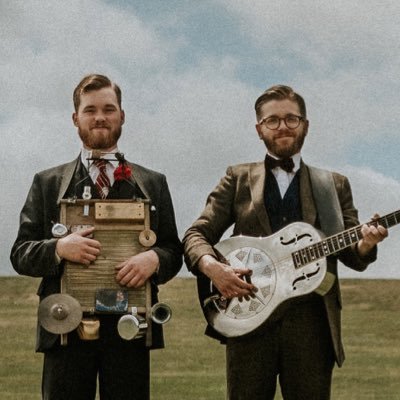 The Washboard resonators provided a show of washboard scraping, string breaking, fingerpicking virtuosity when they entertained the crowd at The Hub at St Mary’s.

The acoustic and grand surroundings of St Mary’s provided a suitable background for the duo of Jack Amblin on washboard, drums, percussion, kazoo, jug and vocals, and Martyn Roper on guitar, dobro, banjo, ukulele, kazoo and vocals as they played a set of covers from the 1920s onwards, as well as their music written in the same style.

The duo has made a study of the time, with instruments and clothing and presentational styles suiting the times, with a repertoire that drew on the blues, early jazz, jug band, and swing band music, playing songs that are familiar but in a different style.

Concert opener Sweet Georgia Brown featured unison kazoo playing that would normally have suited a trumpet, whilst throughout the evening the unison vocals of the duo bought to mind such acts as the Louvin Brothers. Their music was equally inventive, with songs such as The Sweetest Rose, the slide guitar-driven I’m Shaking and I’m Breaking, and the banjo featuring Polly, Won’t You Give Me Everything being particularly well-written pieces.

Martyn Roper’s lively dobro playing had an early showcase during their rendition of Cannon Ball Rag, whilst the humour of the duo was shown in such pieces as Beep, Beep, which made use of a car horn, and moved as smoothly through the keys as a well-kept vintage car moves through the gears. My Car Has Shrunk in the Rain was a story song that was a showcase for the vocals and percussive style of Jack Amblin, and familiar songs such as When You’re Smiling, and The Glory of Love were well sung.

Although humour is part of the duo’s act, they are both serious musicians, with years of live and recording experience between them, which was shown in the fullness of the duo’s sound, and the fact that as well as the singing, they were also playing complicated parts on their chosen instruments.

Songs from the sixties, with Lonnie Donegan’s My Old Man’s A Dustman, complete with music hall jokes, and Johnny Cash’s Folsom Prison Blues closed the concert.