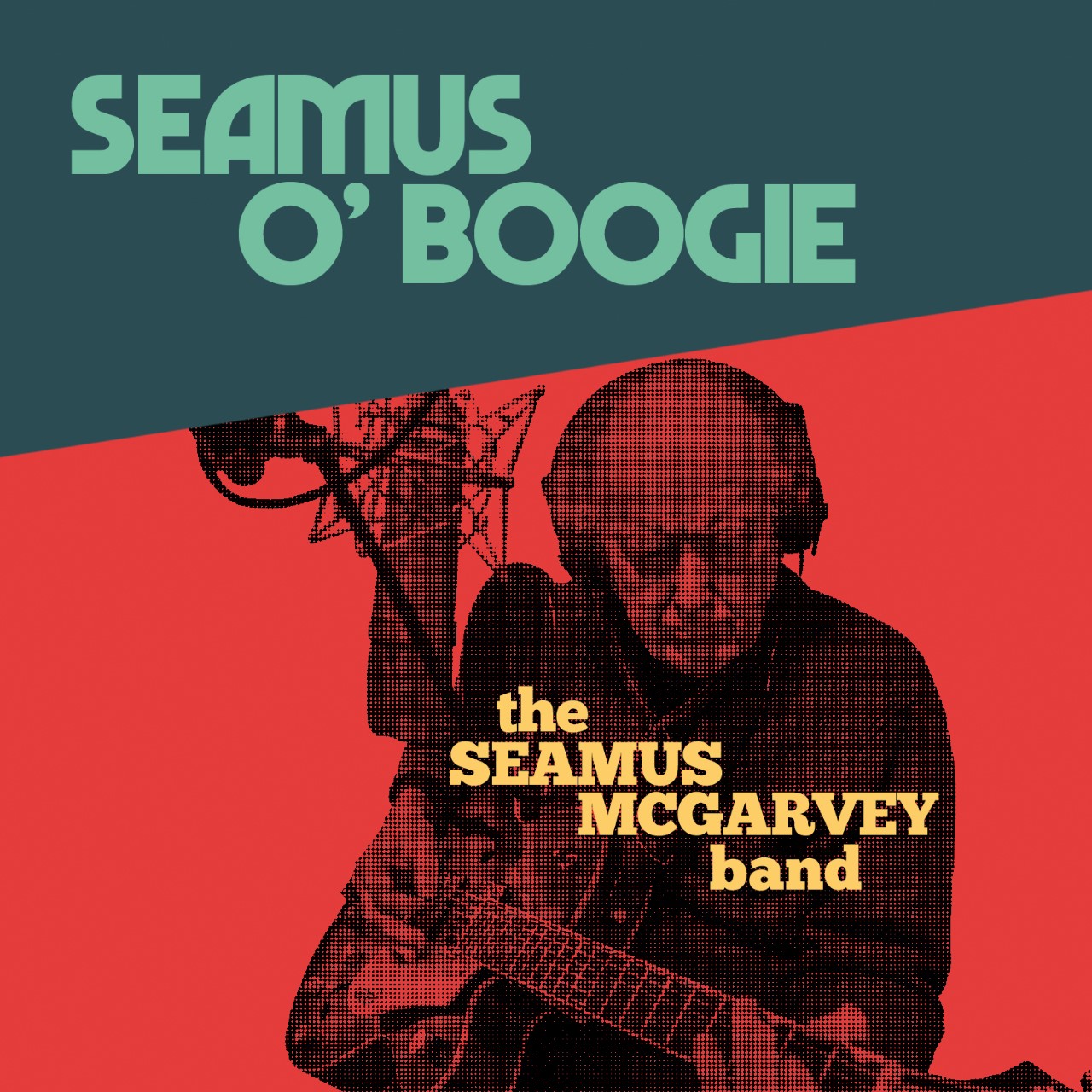 When a 72-year old amateur musician and his family based group from Northern Ireland recorded a debut album of greatest blues songs live in a basement studio over two days the outcomes were always likely to be unpredictable, or at best, interesting.

The fact that Seamus O’ Boogie has turned out to be one of the least pretentious and most honest blues-roots albums released in a long time is testament to the band’s lifelong love of music and performing.

It helps that Seamus and his highly successful musician sons Pat and John are joined by two of Edinburgh’s finest talents, young blues guitarist Jed Potts who fronts the Hillman Hunters, and freelance drummer and teacher Calum McIntyre. Pat McGarvey who is the vocalist and 5-string banjo player with the Edinburgh based bluegrass Appalachian band Southern Tenant Folk Union is also the bass player on this album. John McGarvey, leader of the 6-piece blues, soul and rock and roll band, Johnny Marvel’s Blues Groove, plays harmonica. 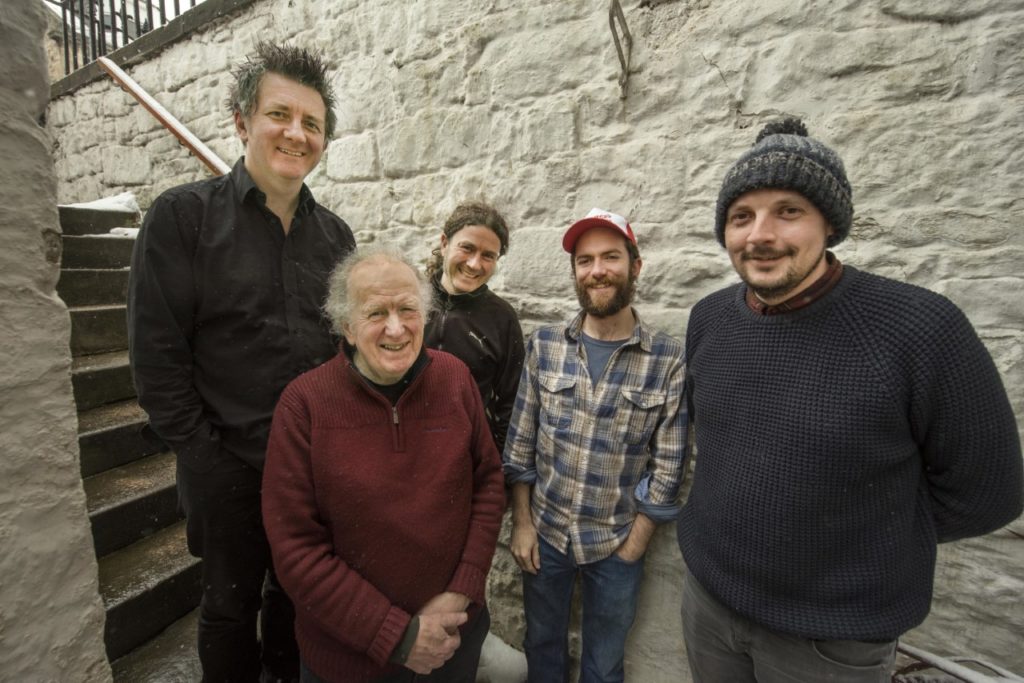 The opening track Rambling On My Mind oozes the authenticity and sincerity of the Robert Johnson original with piercing vocals from Seamus, sympathetic harp interludes and sumptuous slide guitar.

Similarly, Sonny Boy Williamson’s Don’t Start Me Talkin’ showcases John’s immaculate harmonica phrasing and timing, evoking memories of the blues legend. The banjo preceded the guitar in the earliest blues tradition and its inclusion in Sea Of Heartbreak and other tracks makes the overall sound of the band unique and engaging, especially in the hands of the consummate entertainer Pat.

Lonnie Johnson’s It’s Too Late To Cry is a tour de force moment as the listener is transported back in time to the late 50s. There are few better versions of Johnny Otis’ Willie And The Hand Jive with Calum’s infectious R&B Bo Diddley beat enhanced by the handclaps and melodious backing vocals of Pat’s children Johnny and Elsie Belle McGarvey.

Perkins’ rockabilly classic Honey Don’t is significant in that it showcases the multi-talents of the full band swinging along in perfect synchronization. A poignant interlude is the duet by Seamus and his late brother John J singing an Irish ballad The Rose Of Mooncoin in 1983, recorded on cassette at a Belfast family gathering complete with children’s voices but now mastered to studio standard by Mark Lord.

Look On Yonder Wall popularised by Elmore James gets the trademark slide master class from Jed. Willie Dixon’s I Ain’t Superstitious with its infectious riff and innovative guitar solos is another highlight. Sprightly septuagenarian Seamus boogies briskly on Break Up with bopping piano accompaniment from versatile musician Barney Strachan.

Doc Watson’s Deep River Blues is similarly given virtuosic treatment whilst the rich vocal standards are maintained on the soulful Hotel Happiness. The spirits of Sonny Terry and Brownie McGhee are raised through Walk On featuring John’s country-style harmonica and his dad’s mellifluous vocals.

It is John J McGarvey who has the last word on the traditional Mush, Mush, Mush Turai-i-Addy with an emotional rendition of the famous Irish song from the 1983 home recording; “if a fellow can’t drink when he’s living/How the hell can he drink when he’s dead.” 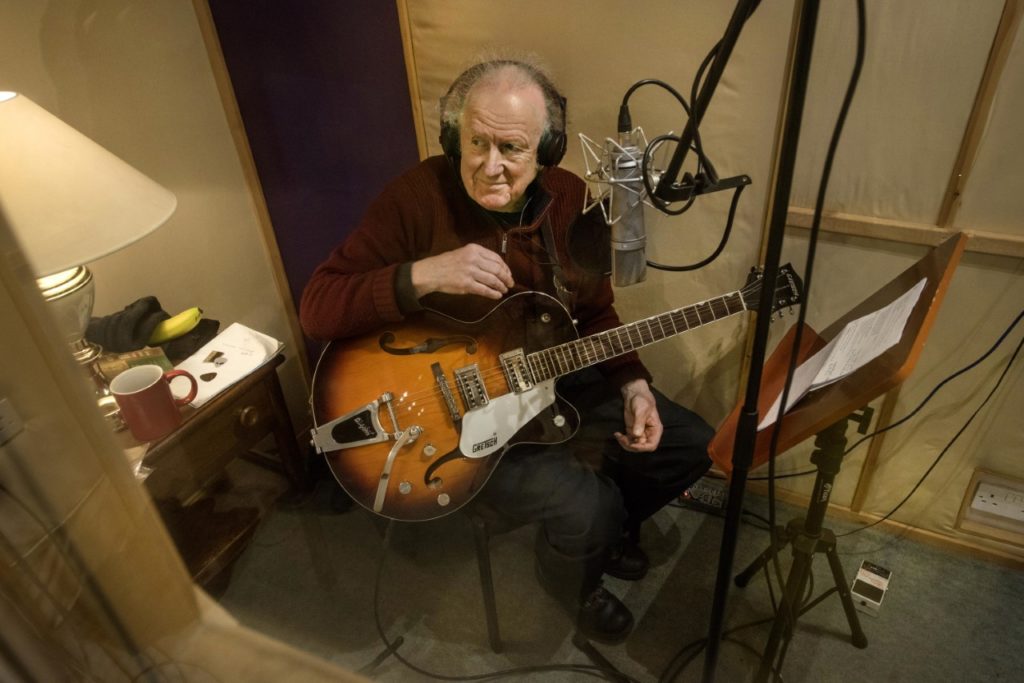 Seamus in the studio by Douglas Robertson

It’s a fitting finale for this celebration of a lifelong love of blues, boogie, roots and rhythm shared by Seamus with his close family and friends. Thanks to the production and recording team at B&B Studios in Leith, this fascinating, refreshing, intimate and historical musical journey has been lovingly crafted into a permanent legacy to be enjoyed more widely.

Seamus O’Boogie is available to buy here at Southern Tennant Folk Union and is also available to stream on all major platforms.

Keep an eye out for an article in the Blue Blood section of Blues Matters magazine too.