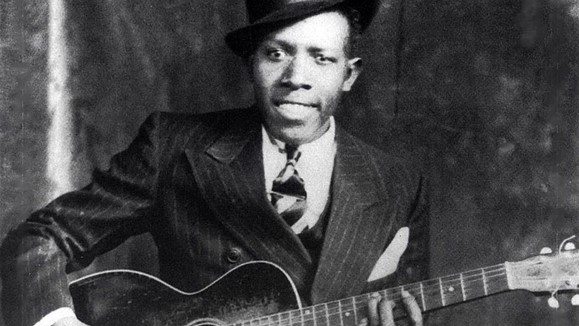 The Eternal Debt by Stephen Harrison

When we mention a debt or something that needs a helping of gratitude it can take many forms. The debt that I’m talking about is the debt that each and every one of us owes to the Blues players, studios and record companies of years gone by.

The artists that I think we owe the most debt to, cover some of music’s finest exponents of blues music that have ever walked God’s green earth. There are obviously too many to mention, but when you think about Louis Armstrong (perhaps better known for his jazz work, but nonetheless) Memphis Minnie, Lead Belly, Muddy Waters and Chuck Berry, to name but a few. All but a few of these trailblazing blues artists came from the Deep South of America.

What binds people such as these, is the fact that each and every one of them came out of abject poverty and humble beginnings. But decades later we are left with a plethora of musical gold. Instantly recognizable songs that still remain an integral part of blues society today, that give such inspiration to future generations of up and coming blues artists.

Such humble origins to which these blues songs belong have become world-renowned and hugely popular. Not only do the artists deserve such recognition, but also the record companies and their producers which helped to create a legacy that for over a century has evolved and manifested into the blues that we know and love today.

Amongst the producers and people that saw just what the artists had to offer was Alan Lomax. When there was no money available from the government to pursue libraries and museums documenting the history of Black America he took it upon himself to bring these artists forward that would tell the stories that became the blues. His ultimate legacy must be the discovery and recording of Robert Johnson and Lead Belly without whom history would have had a different path to tread.

Far from the deep south, in fact in New York, in 1916, Vocalion Records were founded by the Aeolian Piano Company. Now they didn’t have as much global success as say, Chess Records or indeed Atlantic Records, that were founded many years later, but their impact and history will go down in folklore until the end of time. This is largely down to them introducing the 1000 race series that was specifically targeted towards African Americans.

Thus began their journey into recording history that saw them sign Billie Holiday and eventually unearthing, for me the most influential blues artist of all time, Robert Johnson. Without the foresight of Vocalion Records, two of the most influential artists of the last century may have not been heard. Just imagine never hearing Johnson or Holiday. That’s what I allude to when I mention a debt of gratitude beyond belief.

Beneficiaries of their legacy include Eric Clapton, The Rolling Stones Led Zeppelin, Aretha Franklin. Janis Joplin and Beth Hart. Negro work songs that were transformed from ‘Hollerin‘ and warning calls to the workers in the plantations. The foresight of the artists and record labels almost beggars belief. Because don’t forget the terrible injustices and degradation that haunted these folks from the time that they were born. Horrible slavery and disgusting treatment of human beings by so-called higher classes. It was slavery at it’s most brutal, but from all this terrible stain on our past came what we know today, The Blues.

Songs such as When The Levee Breaks, originally written and recorded in 1929 by Kansas Joe McCoy and Memphis Minnie shows once again the debt that we owe. Written about the famous Mississippi Road Flood of 1927, it not only gives us a history lesson about a real tragedy, but it also sets another stone in the wall of blues. In later years perhaps the most famous rendition of this song was recorded by Led Zeppelin for their fourth album. They transformed the original with the use of the harmonica, drums and electric guitar but the basic structure and message of the song remain as it was in 1929. Over forty years later it would be one of the postmodern, but haunting of a blues original song that I have ever heard. Haunting and a sense of fear and dread captured by two of the people who actually witnessed this unbelievable event.

But it’s not just songs that we owe a debt of gratitude to. The history of the late 1800s and the whole of the last century is still ingrained in our memories today. Through blues songs, we have learned about sorrow and tragedy, appalling degradation and the treatment of human beings that unfortunately became seen as the norm for a large part of America and even mainland Europe. I refer, of course to the slave trade. It’s almost incomprehensible nowadays that people of a different colour could be de-humanised and mistreated for money.

However, if history has taught us anything it is that even in the deepest recess of our minds, no matter how far we fall, there is always good that will triumph over evil. It’s almost ironic that from what people called the devil’s music, it gave birth to the greatest cultural and worldwide transformation of views that we now see in blues music. To call it the devil’s music is quite preposterous as from the ‘hollerin’ and warning calls grew gospel music which proved a breeding ground for blues and in later years the birth of Rock ‘n’ Roll.

In churches all over the deep south, the farmworkers and plantation workers gathered to draw strength and virtue from such a cruel existence. Singing about their suffering and hardship and for the right to be treated equally, these songs that have remained forever popular have grown out of the seeds that were sown in the fields.

As more and more blues artists emerged from such humble beginnings, they found a voice that stretched from the delta as far as St. Louis, Chicago and New York. While we remember people such as Robert Johnson it’s important to also remember the likes of Son House and Charlie Patton who had a tremendous impact on the young pretender (Robert Johnson).

In his early years, Johnson followed Son House around just listening to him play and trying to learn from the guy who was considered the master of the blues. As Johnson travelled further afield, he himself met up with a couple of guys who started to follow him around, Willie Brown and Johnny Shines. So, we see a pattern emerging of a legacy that was started in the late 1800s and continued into the 1920s and 30s being honed and nurtured, as if by accident almost.

So, when I say we owe a debt to these artists, we have to realize that this debt can never be repaid. We just draw from the overflowing well of genius and creativity that lies in abundance in these musical masterpieces. Indeed, the well-known blues artists of today are still drawing from the well, not by copying or imitation, but by taking the message of the blues with all its ills and woes that have always been there and transforming them into the blues of today.

You can take the blues out of the Deep South and out of North Africa but you can never take the deep south and North Africa out of the blues. Trials and tribulations will always be here to help guide us into the path of blues enlightenment. For that, we shall be forever indebted to the visionaries of the beginning of the blues. Without all them and the terrible history that ensued over the last century we would not be as enlightened as we are today, nor would we have such a profound legacy of history and understanding and feeling that you only get within the blues.

To fully appreciate the history and background of blues music and blues musicians you must first understand and learn the full history of blues roots and the struggle that went with it. Only then can you start to feel the blues within your soul. If you don’t feel it, you don’t got it.