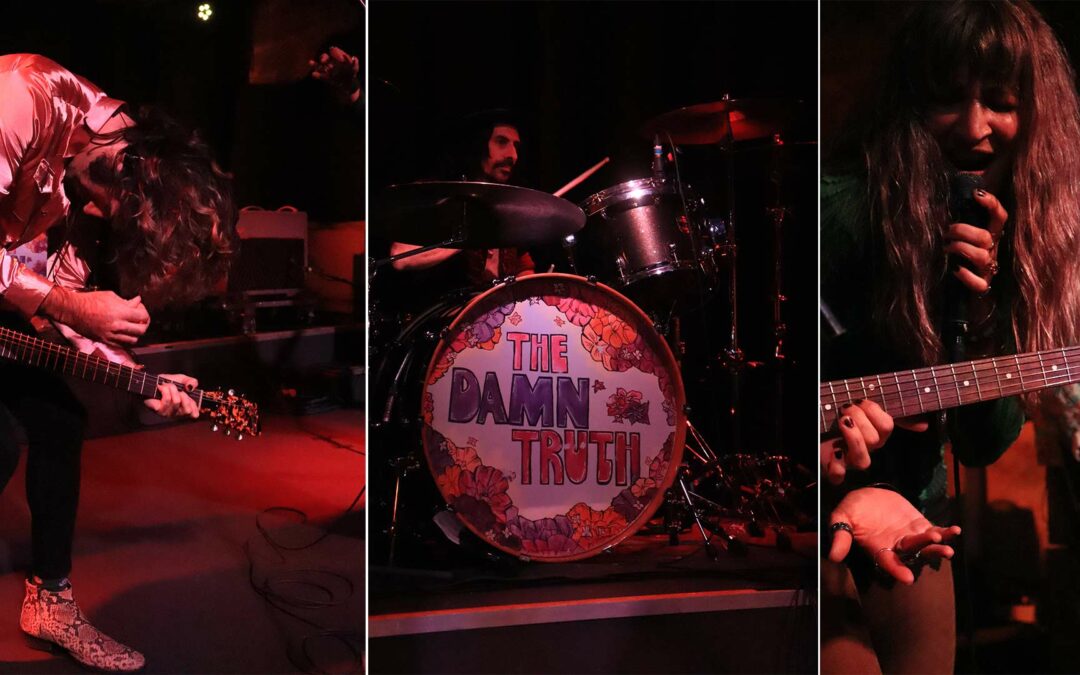 Blues music is a huge church that encompasses many disciples of this genre. Tonight saw four of these in action as headliners, the four-piece Canadian powerhouse unit that is The Damn Truth, (Lee- La Baum, lead singer and guitarist, Tom Shemer, guitarist and vocals, Py Letellier bass guitar and vocals and Dave Traina on drums ) purveyors of genre-defying music drenched in rock tradition with their own twist, they deliver on so many levels but the major thing is raw energy and pure entertainment from start to finish.

They gave everything into every song they played, every guitar solo mixing rhythm with a swagger and interplay on stage that was mesmerising to watch. The connection with an adoring respectful audience was a musical alchemist’s dream, They were full on and enjoying every bit of working the crowd and getting them to join in.

Spectacular outfits, and stage presence is everything with this band. Whether it is the lead singer’s screaming vocals, the drumming backbeat or mind-blowing guitar riffs and licks, they rattled through their set with ease and rock n’ roll finesse. Entering the stage to an underture of White Rabbit through the venue’s PA, they immediately set light to the touch paper to the opening chords to the anthemic, This Is Who We Are Now.

The sonics of their music filled the venue and the sound was particularly good. Full On You was delivered well upping the already pacy tempo. Too Late was next, this had the hallmarks of great tone and the band cranking the sound. Pirates and Politicians slowed the tempo to ten! Then came another highlight, Lonely which had a funky beat, clear vocals then morphed into a shamanistic crescendo, mix some guitar soloing and the crowd went wild. Other highlights were the incredible latest single, Look Innocent full of vibrato and reverb. They finished off the set with Tomorrow that really brought the venue’s acoustics into being. High ceiling seemed to help the sonics with this major anthemic tune. Leaving the stage to a baying crowd they returned with two wonderful closing numbers for the encore: Love Is Blindness was just superb and loud. Vocals soared over wonderful guitar work. Final song, Heart Is Cold was just the essence of what a live performance is all about.

Each musician getting their own parts to just rock out, whether it was bass guitarist playing his guitar over his head or lead mixing pedals kneeling on stage with lead singer and guitarist joining. This band were on a different level of genius tonight, catch them where you can, their star is on the rise, you will not be disappointed. Exceptional band of musicians a wonderful spectacle of entertainment and sharing the positivity in the venue, this is what live music is all about, mind blowing hedonistic vibes.

Support for the night was from Scarlet, a four piece in your face young grungy, alternative rock band fronted by the effervescent Jessie Scarlet Robinson on vocals and guitar. Adam Cunliffe supplied meaty groove licks on lead guitar, with the rhythm section of Jake Brown on bass and drummer Chris Roughley. They were a superb warm up act, mixing various styles but a band full of power and raw energy. Thrashy tones on songs such as Wrong Way, Bring Me Down and the new single In And Out provided an electric start to the night. Particularly liked the song Fear, which dealt with reflective issues of seeing positivity through tough times. An impressive performance a good fit for tonight’s headliners.