THE BENNET BROTHERS – Not Made For Hire 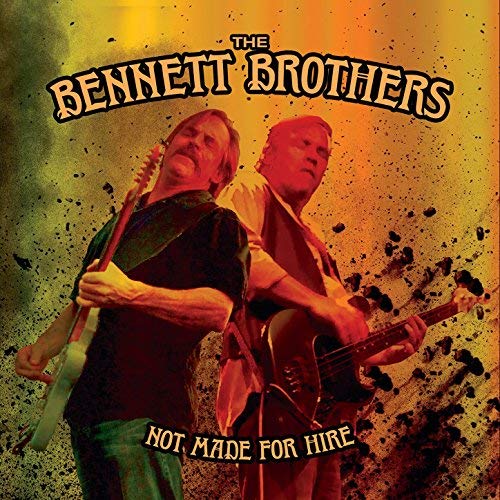 Album Review for The Bennet Brothers – Not Made For Hire

The Bennet Brothers (Jimmy & Peter) come from the South West Corner of Bay Ridge Brooklyn by the Verrazano Bridge and have played alongside such greats as B.B. King, Bo Diddley and Levon Helm.

Their latest release Not Made For Hire is a finely crafted collection of guitar-based blues, made up of eleven tracks, all by Jimmy Bennet.

Junkyard Dog opens the proceedings and fairly zips along to a great riff and some lovely Hammond organ from John Ginty and a lovely solo from Jimmy Bennet.

Hold On Tight is a gritty, funkier number, with a slightly slower pace and some lovely electric piano work.

I Just Don’t Want The Blues Today is a slow blues number, with some haunting background vocals from Linda Pino. It has a great guitar break from Jimmy, who shows that he is equally adept at playing slow numbers as well as fast ones.

My favourite track on the album is Blues #9, which I will undoubtedly play quite a bit. It’s a blues shuffle, showcasing some great guitar work in conjunction with a good use of the wah wah.

What’d I Do is a riff-based track, which must be a great song to be heard live. (Although I’m not sure about the punctuation, but who cares?)

Rocking Chair starts off as a slow blues number that has some great slide on it, but then heads off into a rockabilly direction, which makes it all the more interesting for it.

How Long sounds like a Peter Green number (is it possible to give any higher praise than that?). It has a simplicity of lyrics, combined with a steady drumbeat and bass backing (à la Black Magic Woman) and some searing guitar work along with a touch of Hammond organ, giving it that Santana feel. A great track and a lovely number in the style of the great maestros Carlos S and Peter G.

The title track Not Made For Hire chugs along in a Rolling Stones type of groove.

The whole album is well worth a listen to and makes great driving music, but it does come with a warning “Try not to get a speeding ticket!”