SUSAN SANTOS No U Turn 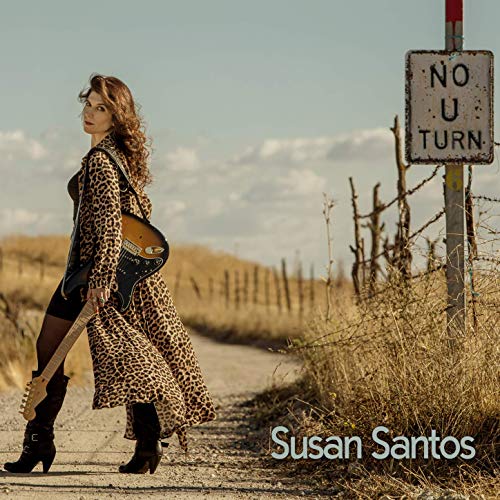 Susan Santos is an American blues musician who is now plying her trade in Europe, specifically Spain where this her fifth album release was recorded.

Last year Susan was awarded the Best Musician Performance at the European Blues Awards, highlighting the pedigree she has in blues music. Susan leads a three-piece band here handling the vocals and guitar, while the music is blues-based, they do veer into a Southern rock style at times which nicely fits the three-piece setup.

All the material has been self-written and the ten songs sit nicely together mixing rocking blues alongside softer styles, with some Americana thrown in for good measure. Susan’s lead and slide guitar work, is very restrained and under amplified there are no loud blazing solos, she just concentrates on getting the tone and rhythm precise, a prime example is the song, Dry River which has a sparse Clint Eastwood Western soundtrack feel to it and finishes with a sublime guitar echo fade.

Other song highlights include the opening two tracks Blind Woman and Slow Down which both pack a punch and have a great chugging rhythm, while Susan’s best guitar work is on the demonic song Heaven or Hell.

Susan is a competent vocalist with superb clarity although from my perspective I feel she lacks some expressiveness in her voice particularly when covering the darker blues subject matter, overall though this is a good album full of excellent material that she performs well ably supported by the solid rhythm section of David Salvador and Mario Carrion.