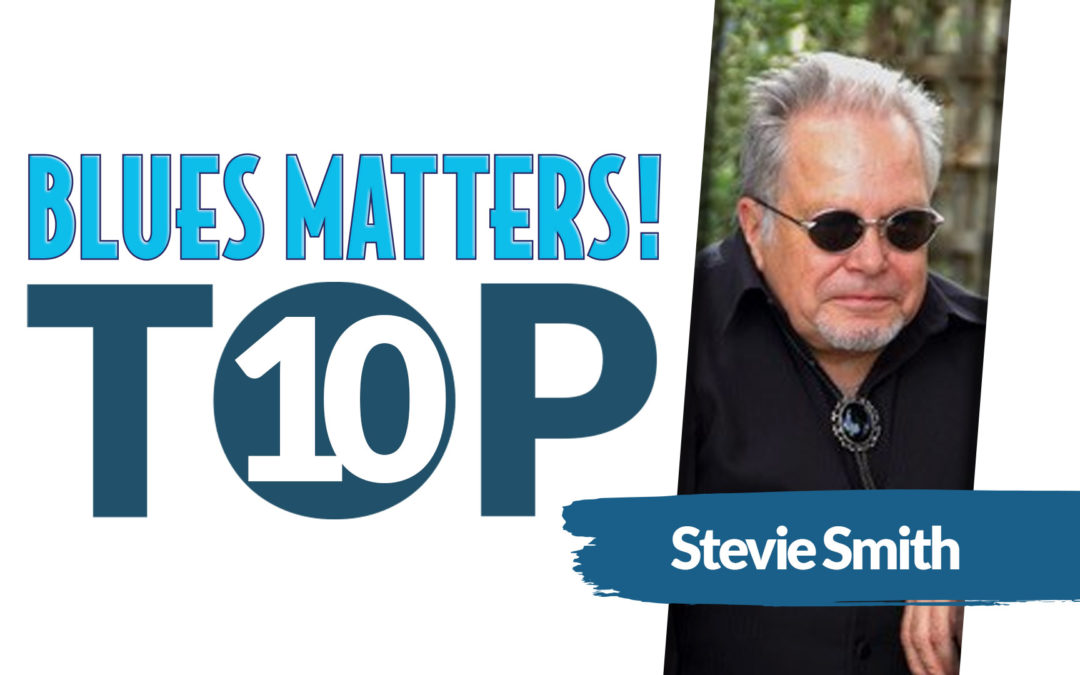 London based Stevie Smith is a Rock/Blues vocalist and Harp tart of some fifty years standing. Twenty-odd years of that was spent as a frontman for Ruthless Blues, in the ’80s & ’90s, and before that with SALT in the mid-’70s and early ’80s. In between times, some myriad other bands, and well, anyone really. He is currently with his new band Sin House.

Ten songs. This has not been easy. In the end, I went with whatever popped into my head, at the moment. if you were to ask me tomorrow it would probably be a totally different list. So, with that being said, and in no particular order.

The simplicity of the riff, the hurt in the voice and the most unflashy harp ever, but it is oh so effective. It’s got to be on anyone’s list.

It’s that soulful world-weary voice that gets you,  and the well-written thought-provoking observational lyrics, magic. The Amy Winehouse of her day.

I first heard this at a friends place. I think we were about fifteen, or sixteen at the time. He said. “Here! Listen to this” and there it was, The Blues, that voice, that guitar, that band and humour all wrapped up in one glorious package,  And I was moved to the core of my sixteen-year-old soul.

This was the first Wolf I ever heard. He was on the telly and I must have been about twelve, it was a Friday night and the program was Ready Steady Go. It is indelibly imprinted in my memory.

Just listen to the emotion in that voice. If that doesn’t smack you in the soul…You ain’t got one!

Now with Muddy Waters as with Howlin’ Wolf and Sonny Boy, it could have been any 1 of his whole catalogue. I plumped for “Walking Blues” I just love this treatment of the tune. Again it’s the voice. It’s like he’s your mate telling you what happened to him after last night, or the blues he’s got. I find it somehow intimate. Also, I feel if there was a Greek pantheon of Blues gods, then he’s Zeus.

The pure energy and spontaneity of the piece. That and the simplicity of the harp work. Only it’s not, just try playing it…love it!

8 – Led Zeppelin – Since I’ve Been Loving You

If you are going to fuse rock and blues what you do is start with heart, and gut-wrenching vocals, have one the most searingly intense guitar solo’s ever recorded, and you have it all, powered by the best rhythm section of their day. This is exactly what Led Zeppelin did back in 1970. What a gem.

9 – Ray Charles – The Night Time Is The Right Time

I was ten when I first heard this, ten! My first introduction to that kind of vocal, rough and raw. Ray Charles and Margie Hendrix going at it hammer and tong and hinting at something my young mind couldn’t quite grasp, but Oh yes, I wanted in on it. Whatever it was.

Love the minimalist backing. Bass, bass drum, tremolo guitar and floating above that you have Rogers vocal. Add one of Jeff Becks finest recorded solo’s that I’ve ever heard. I’d say it would be difficult to contemporise an old Chicago standard any better.