Sitting In with… Nelson McFarlane

Recently got the chance to chat with bass player Nelson McFarlane, he has a few musical projects in prospect, one of these is playing in Greig Taylor’s new band. He talks about how this evolved and his back story. It went something like this…. 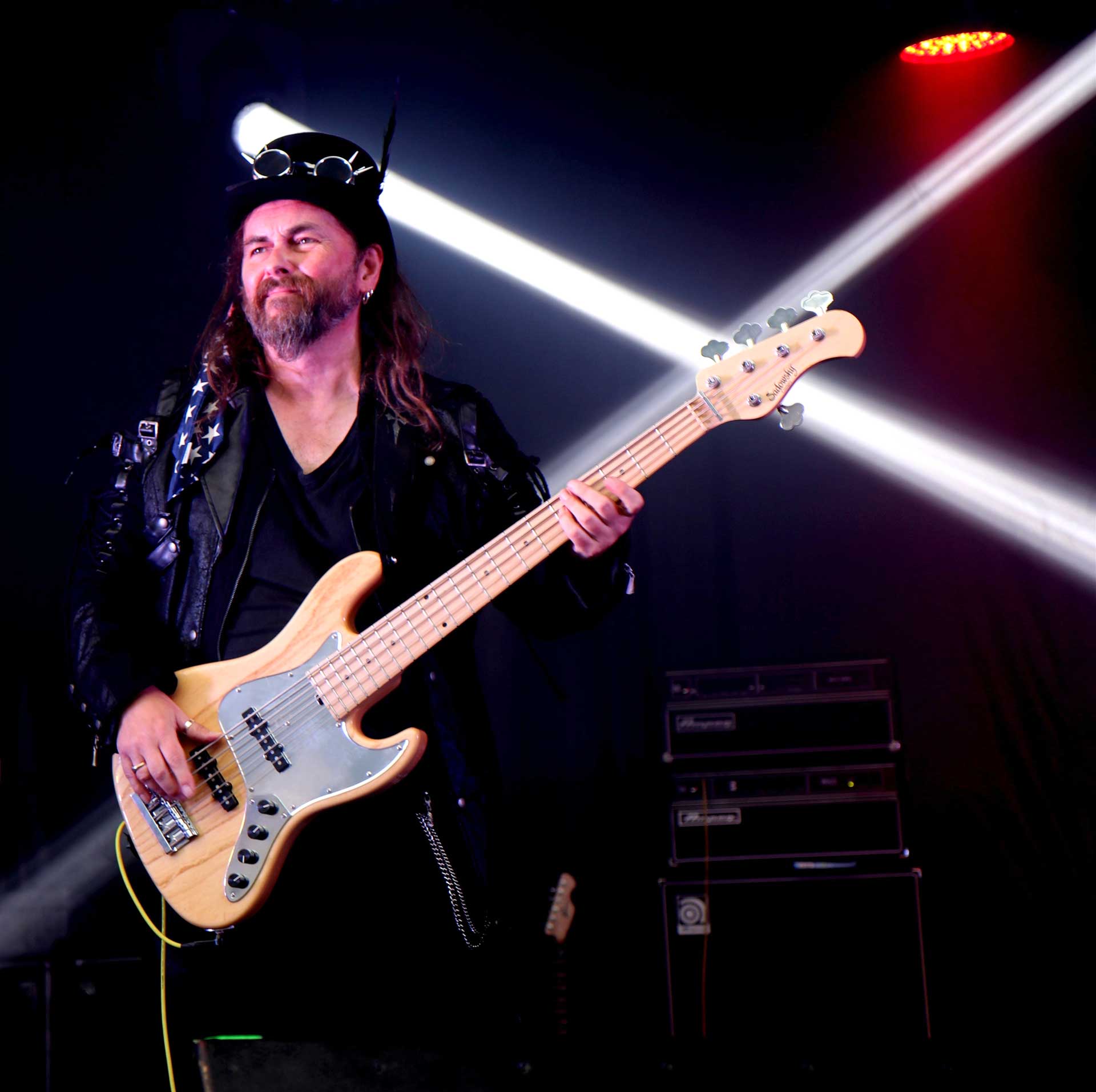 How did you get involved with Greig Taylor’s new band?

Dave Cantwell, a drummer I knew from a while back, came to some gigs in Edinburgh where I was playing. Out of the blue he said “Do you fancy playing in a blues band? “I always thought I’d end up in a blues band at some point. I listened to some recordings, Greig has some voice, one thing led to another. The band had, Brian McFie on guitar at that point whom I knew and liked his playing. He played with the Big Dish. He’s steeped in the blues genre, I suggested Davie Cowan as keyboard player. He plays with me in three other bands and is a fantastic blues piano player. He fitted in well, a bit of Chemistry was going on in the band. It has developed, we’ve recorded, done a few gigs, it’s very promising! The main thing if I’m in a band is if I enjoy it, that’s the acid test. There’s sometimes you get that feeling of the hairs going up your back if you don’t you should just give up! There’s a four track E.P. coming out at end of month and album later this year. Only one track from the E.P. will be on the album. The majority of the tracks are great. Greig is a good songwriter and great singer.

Partly because of the pandemic, a lot was about swapping files online. Dave has a country estate, and everyone brought their parts to the party and songs formed. We rehearsed them. The whole process has taken about a year. The songs were partially formed then were developed.

You managed to persuade earl Thomas to sing on this recording?

I never knew about him. I’m coming to the blues scene via rock. When I heard his voice, wow, very impressed! The process there was transatlantic with sending files to the studio at Glasgow HQ from America. Gregor McPhie engineered the process, he’s great. He wanted Earl’s vocals from America sounding as if it was recorded in the same place. There’s always going to be reverb but it’s worked out very well. Let’s see how far it can go, we’re all enthusiastic about this.

Your musical roots are in a rock style?

I’ve played in funk bands as well. Without trying to sound too arsey about it, I think the more styles you play, the better. You pick up different styles as a bass player. Nothing wrong with widening your scope. I listen to most styles of music, apart from Country and Western, rap and hip hop. Love seventies disco, like Chic, the bassline there is impressive. The blues style and groups I was exposed to most was at the heavier end of the spectrum: the usual suspects, Gary Moore, and Scott Henderson. Heavy electric blues is what I listened to. I would say Free were a great blues band. Don’t have knowledge of the early embryonic blues. But blues is behind every style of music really! I used to see Blues N’ Trouble in Edinburgh all the time. I should widen my influences but there’s only so much time. You can’t listen to everything.

You are bass player with The Sensational Alex Harvey Band Experience, surely Alex came from a blues style angle?

There were a lot of blues influences with him. We’ve been asked to do a blues Festival later this year. I guess people recognize we have blues influences. We played the Isle Of Arran Festival, I love the place. I can see me living there at some point when it’s finally time to hang up the guitar!

What made you want to become a musician?

The first thing I remember is lying in bed listening to Radio Luxembourg late at night as a kid, hearing Hendrix. By coincidence, my Aunt came back from Spain with a crappy guitar, and I learned how to play it, self-taught and all that. There were always six people wanting to be a guitarist in a band, nobody wanted to be the bass player, so I thought, I’ll be the bass player. That was forty-five years ago, and I can’t do without it now as most musicians will tell you! First band I was in, we played School dances in Edinburgh, we were dreadful! I hardly had any equipment. There was a guy playing piano and we only had two microphones between us, one in the piano, the other was for the singer! We discovered if you put on a pair of headphones into an amp they can act as a microphone. That was mid-70s. Then I joined another Edinburgh band, mostly rock stuff. I look back on those times with great fondness because there was no band politics, no money issues. It was fun and…you join bands to meet women, that’s the reality of it, some would say that’s not PC nowadays… I never got into a band who became famous. Ended up in a band with the unfortunate name Holocaust which changed its name to Hologram. An album came out and we thought we’d be stars. Reality kicked in and we were offered a tour spot as support to Ian Gillan, you had to get someone to put £10,000 down, it just wasn’t going to happen. Unless you have money behind you… Chances of making money in the music business is heightened if you live in London, that’s always been the case. Glasgow with the Postcard Records scene rode a wave in the punk era. A lot of bands made it through. There are beginnings of a new music movement in Glasgow, there’s a lot of funk bands there. I saw one last week they had Hamish Stuart from the Average White Band. It’s an arrangement where he can raise his profile and the band being associated with him gives kudos, no harm in that, they should be famous!

I joined The Sensational Alex Harvey Experience seven years ago. Alex Harvey was a band I liked when I was younger. I went to the famous Christmas gigs. I met a guy Andy who was in the tribute band who had not heard me play for a while. That’s how I became the bass player! Five years later, Davy the keyboards player who’s a huge Alex Harvey fan although not seen them live, he was in touch with Zal Cleminson. He put the band together Sin Dogs, it came to an unfortunate end. It meant we played bigger gigs. I got to play bigger gigs than I normally would get the chance to if that band didn’t happen. We had a lot of good gigs. To use a football analogy, we were third division heading for promotion to the second then everyone thought they were playing for Barcelona! The highs were playing at Sweden Rock to 35,000 people and 20.000 at Cropredy. Just to play for that amount of people is a pleasure. The downside was some people thought they were more important than they were and money issues, there was a schism. Three left, including myself. We are continuing Sin Dogs without Zal because there’s still a bit of interest there. A second album is getting recorded.

What style of music do you prefer playing?

Rock, but it has a blues influence. I enjoy playing funk. It’s a more challenging genre for a bass player. It’s more about what you leave out than what you put in. Another group I’m involved with is The Meissner Effect, what a great bunch of musicians. Davy from the Alex Harvey Experience is the writer. Promoters, of which I’m one as well are out to make money. They don’t want to take risks. So, the way the market is now it is; let us not risk too much, we’ll just get a tribute band in! There’s a ready-made audience there. But that’s to the detriment of bands with new material. I’m part of the problem! In 2022 it depends on a band’s social media profiles are like. I’ve been to gigs that have been poorly attended you still have to pick up the tab for the hiring of the room and all that. Nowadays you must have an Electronic Press Kit, a number of videos. When I started playing you just turned up for a gig, that’s not the deal now!

There are so many ways of listening to music nowadays, when writing or producing music what do you think is most important?

As long as a song has a hummable chorus that’s all people are interested in. So, all those Musos, including myself who think about changing time signatures and things, it’s all bullshit. If you want to sell stuff just keep it simple. When playing, less is more! It’s knowing what not to play is the important thing I think, but that’s a generalisation! There are tasteful guitarists out there, but some are in a world of their own not listening to anything else. The general public wouldn’t know what a bass guitar is. However, they will notice if you were not playing one! If you don’t have that bottom end to a band’s music the game’s a bogey! Every band I’ve played with has had a great drummer. They always follow the bass player anyway these guys! One thing that is important to me listening to the blues is the vocal delivery. It has to be done with some belief and passion in the song. Greig Taylor’s delivery is from the heart, he sings things he means. The title track of the album “The Light” is a great song. Alex Harvey was a very underrated singer; he didn’t have a great voice but what a delivery. He always had great timing. The music business has changed a lot. An album is almost like a calling card that you’re giving away. The only way to make money is to go on tour and flog merchandise. I have thousands of albums but hardly play them. I have my Spotify Account and listen to music that way. There is so much choice in music now. I don’t listen to an album from start to finish anymore, time is short!

Any favourite tracks on the new album?

“The Light” is great. I’m drawn towards the slower songs which are the most difficult to play. If done well it’s a feat in itself! “Bleeding Love” is an example. “Destination,” is a gospel blues song which I really like. The duet Born To Love You with Earl Thomas and Greig is incredibly good. There’s a horn section. It’s a guy that Gregor at HQ knows, he does them all. It brings a Memphis feel to the songs.