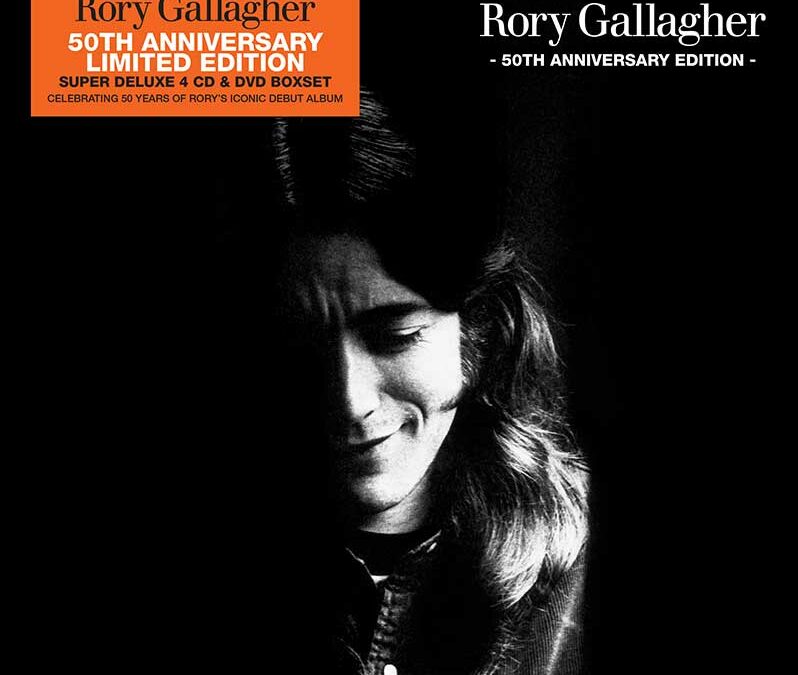 To celebrate the 50th Anniversary of Rory Gallagher’s eponymous 1971 debut solo album, UMC/UMe is pleased to announce the September 3 release of a five-disc deluxe box set of the album. Rory Gallagher 50th Anniversary Edition will include a brand-new mix of the original album, 30 previously unreleased outtakes and alternate takes, a six-song 1971 BBC Radio John Peel Sunday Concert, plus four 1971 BBC Radio Sounds of the Seventies session tracks, all mastered at Abbey Road Studios.

Also included is a previously unreleased 50-minute DVD of Rory’s first-ever solo concert which was filmed in Paris for the “Pop Deux” television show.

The extensive box set package will also contain a 32-page hardback book with many rare and previously unseen photographs from British rock photographer Barrie Wentzell, essays and memorabilia from the album recording including hand-written song lyrics by Rory, and an exclusive limited-edition poster.

The 2CD and 3LP editions of the album will be cut-down versions from the deluxe box set. There will also be a special limited-edition Neon Orange (transparent) 1LP featuring the John Peel Sunday Concert exclusively available via UMG’s online stores uDiscover and Sound of Vinyl.

The box set will also include exclusive liner notes written by his brother and manager Donal Gallagher, his longtime bass guitarist Gerry McAvoy (1970-1991) and photographer Barrie Wentzell, plus a full 1971 interview with Rory by journalist Roy Eldridge.

The debut album features some of the most beloved Rory songs such as “I Fall Apart” (Rory’s second most streamed song), “Laundromat” and “Just The Smile.” While reviewing numerous tapes during the 2021 mixing sessions, two songs were added to the collection: the previously unreleased “At The Bottom,” a track Rory ended up re-recording for his 1975 Against The Grain album, plus “Advision Jam,” a rocking instrumental. The recording saw Rory Gallagher on guitar and lead vocals as well as alto sax, harmonica and mandolin, Gerry McAvoy on bass and Wilgar Campbell on drums. Atomic Rooster’s legendary Vincent Crane plays piano on two out of the 10 songs on the album “Wave Myself Goodbye” and “I’m Not Surprised.”