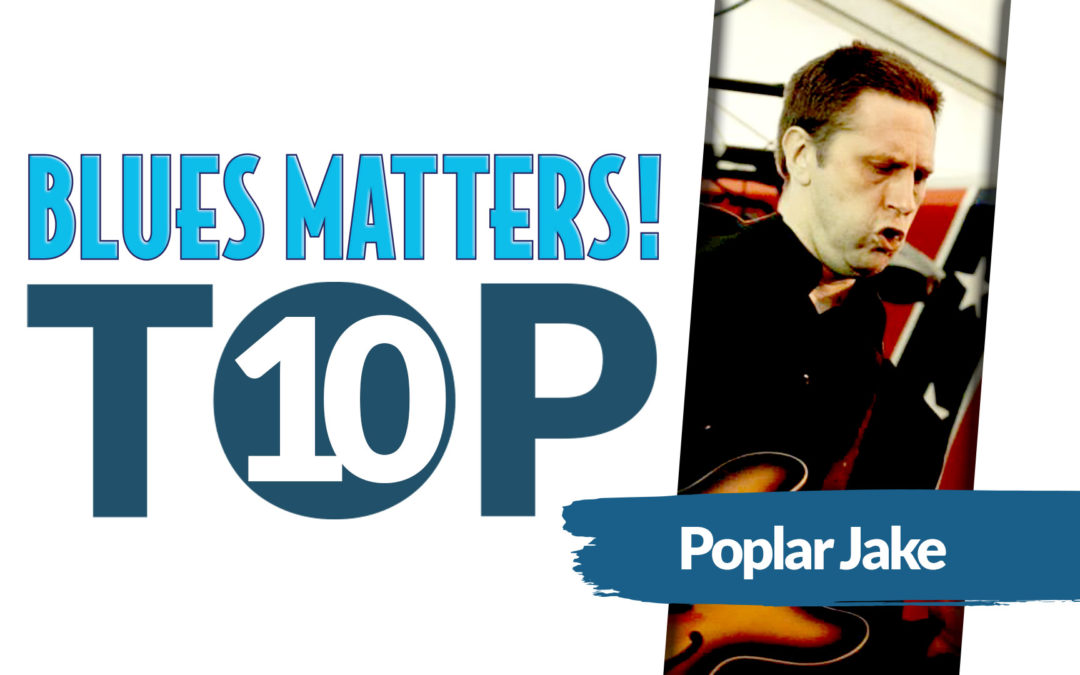 I discovered the blues as a teenager. It was enough to inspire me to want to play. Of course, wanting to and being able to are different things, and it was a long time before I could do anything with it. I was in and out of different bands for years, the blues always informed what I did but I was reluctant to put myself forward as a ‘blues singer’, never mind a Bluesman, which I think is something else entirely. It wasn’t until about twenty years later when I finally thought ‘maybe I can do this…” I enjoyed four years as a solo performer and four years with a band, the Electric Delta Review. Ill health means I‘ve had to take a break these last couple of years, but I’ll get back in when the time is right.

Of all the great Patton songs, I think this one really demonstrates Charley’s fearsome abilities like none other. You’ve got that lovely guitar figure – not an easy thing to play – with all its sweeps and moans and variations, and over the top of that the man is relating a two-way conversation –  “Would you kill a man dead?” “Yes, I would!” – then at the end of a stanza, the guitar itself says “spoonful”! Perhaps the most incredible thing is the performance sounds totally relaxed, completely natural, as though there really were two people talking while somebody picked a guitar.

It’s also a frightening song. Intimidating. Here’s a man whose cocaine habit could drive him to violence towards men and women alike. It doesn’t sound like recreation to me.

Yep, another one about the old hokey-cokey, but a very different song that tells a different story. The ragtime progression sets a playful mood, and it’s easy to laugh and the Barnham-Bailey vignette. But here’s a guy who’s lost his wife and had everything repossessed (“if there ever was a devil born without any horns, it musta be the furniture man”) because he’s done it all up his nose.

Now he’s basically poncing off a working woman with a good job – in the white folks’ yard – as long as she makes that two-and-a-half a week. Here and there you hear a lyric that would cross over into other cocaine songs and become standardized. The song as a whole tells you something about the social conditions of the time. Like the blues oughta do.

I love the way it moves. Simple as that!

The greatest riff ever conceived by anyone, ever! Robert Johnson and Kokomo Arnold had used it before, but Elmore electrified it and made it his own, to the point where it’s now become “the Elmore James riff”. That riff and that shuffle are just unbeatable. And on top of it all, that voice! That visceral, keening, high-pitched moan puts Elmore up with the greats. If he’d never played a note in his life, we’d all be talking about what a great blues singer Elmore James was.

One of the few collaborations between master and disciples that, for me, actually works. Canned Heat was the perfect foil for Hooker at this time; Alan Wilson and Bob Hite were steeped in the country blues tradition and Wilson had full working knowledge of John Lee’s style. I love the way he kicks off with Hooker’s most famous guitar riff – on harp! Hooker and Wilson make it for me. Blind Owl was one of the few who could sit in with the masters and hold his own. To quote John Lee – “you hear that cat, on the harmonica? THAT’s the Canned Heat!”

Going with the Blue Sky version, over Chess, here. Sacrilege to some perhaps, but this was my introduction to Muddy. The field-holler at the beginning and then it happens – two guitars, piano, bass, drums and harmonica all laying into THAT riff! To a fifteen-year-old kid at the time of synth-pop, this was like something from another world. I still remember the shock! It was like something primal that we’d all forgotten. And right from the word go, Muddy’s voice had that power. You sat up and listened. There was no BS about him. The hoodoo references made no sense at the time, but you knew there was something deep, dark and magical in those grooves. Ain’t that a man? Oh shit yes!

Anything from this album would do it, to tell the truth. It was massively important, not only when it came out, but also twenty years on when it turned a lot of rockers on to the blues. Clapton’s tone here is phenomenal – yeah yeah yeah Les Paul through a Marshall, but he did it first! Many have followed his lead and ran with it, but none of them sounds like this. I picked this track in particular because I remember trying to play it. No YouTube tutorials back then! Thirty years on, I think I’ve almost got it…

Another song I remember vividly hearing for the first time. I was astonished at the sweet tone, but more by the economy of Peter Green’s playing – the spaces! I’d heard Clapton, all spit and fire, ripping through “Have You Heard?” and of course I loved it, but here, was a wholly different approach to a slow blues. The spaces, the rests, the choice of notes and the timing.

I remember my old man coming in and saying “what’s this?” He was an old-school jazzman who had little time for blokes with long hair and guitars. But he heard something in it and we sat and talked about music for a good while. He talked about Miles Davis, how he had the same qualities in his playing. Then he taught me a twelve-bar and explained how to transpose it. “Listen to your records now, you’ll understand them”. So that’s what I remember; the revelation of Green’s playing and my dad teaching me the blues.

Much like “Need Your Love…”, it’s Billy Gibbons’ tone and taste that makes this one stand out. Sweet, full, exquisite. ZZ, of course, is renowned for dirt and drive, the classic Marshall crunch, but this is equally special. The arrangement is lovely as well, with its low-register single notes and minor chords. And for once there’s no innuendo or cockiness. It’s a simple, sad song – a blues – delivered masterfully.

Dave Sims (drummer) put me on to Jimmie Vaughan; I’d never really listened to him before that, so I was a bit late to the party. But I loved this track straight away. A great instrumental, with a real tight-but-loose vibe to it. There’s no bass on this record, it’s all the organist’s left hand, but it’s got real thump and drive. And Jimmie Vaughan’s playing is unique, unpretentious and brilliant.

Godfather of British Blues John Mayall (OBE) announces a UK tour for 2019.
John Mayall will be bringing his 85th Anniversary Tour ...
SAM LEWIS Loversity
Sam Lewis - LOVERSITY. Released on Loversity Records...
DEBBIE BOND UK Tour Dates Announced
Alabama blues-lady Debbie Bond returns to the UK for an...
ALBERT CUMMINGS Discusses His Top 5 Blues Albums
On the back of his recent interview with us for the cur...