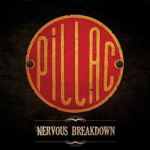 An established French guitarist Xavier Pillac, has released three albums of his own and has had a distinctive career so far. Amongst others he has shared the same stage as Lucky Peterson and Ana Popovic. On this release he has formed a new band named Pillac. An interesting blend of blues funk and soul makes for very pleasant listening. A lot of influences on show with a rare cover of Johnny Guitar Watson’s You Can Stay But The Noise Must Go, showcases a band of quality musicians. This was co-produced in Xavier Pillac’s studio with Xavier and Albert Milauchian, a sound engineer who has worked with such bands as Malted Milk. Xavier Pillac and his bassist Antoine Escalier have worked together for thirteen years and wanted to experiment with the addition of a horn section, this noted in such tracks as the opener Never Make Your Move Too Soon, which blends in with a wonderful organ arrangement played by Cedric Le Goff and the funky undertones of bassist. For me one of the most outstanding tracks is the title track Nervous Breakdown, very laid back tone to this but the band really gelling together with harmonious effect. Xavier Pillac’s vocal range and tone add a different level on the gentle lyrics and arrangement on, I’ve Been Down. Also his effortless slide guitar playing just resonates through the whole release a superb sound a band worthy of more exposure.