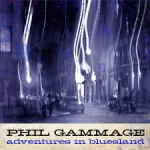 I vaguely remember Phil Gammage from a few decades back as some kind of latter day punk meets psych kind of fella. But nowadays he seems to be operating in a Gun Club meets Calexico twilight style world. And it has its moments. Things start off in an Tarentino theme bar with an interesting take on Elvis Presley’s Trying To Get To You before an array of twang filled laments lead you towards a jazzy, bleak version of Sonny Boy Williamson’s Help Me, which would make Chris Isaak proud, before a surprisingly sprightly run through of La Grange by ZZ Top. Well, he is a fellow Houstonian. Elsewhere, he sticks to the mean and moody pose, with lots of lap steel and banjo, courtesy of Don Fiorini, filling out the arrangements. For sure, his baritone vocals won’t be for everyone, and the album is probably three songs too long, but it’s a long way from where he started. It’s actually at its best when he reinvents the traditional material of Baby Let Me Follow You Down, In The Pines and Wayfaring Stranger, three well covered songs that get a good kick up the backside here, and sound all the better for it.