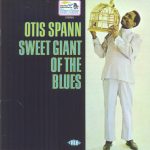 Another re-mastered reissue, this time with nothing but the original 8 tracks, this was Otis’ final recording, released originally in 1969. Just one year after he had left Muddy Waters band. This shows a change from the straight country blues that he had been playing with Muddy and is very much more of a soul record. Surprisingly, it still sounds fresh today, and Louis Shelton on lead guitar is in tip top form, laying down some funky lead. The rest of the band aren’t too shabby either and this is a great album. Opening with the iconic Got My Mojo working, followed up with a 7 minute track of big bouncy blues in Selling My Thing Moon Blues is one that I don’t recall having heard before and it has some great lyrics. This may be 45 years old, and only 8 tracks, but don’t dismiss it, it deserves a place in anyone’s collection.