ORION AND THE CONSTELLATIONS Alive 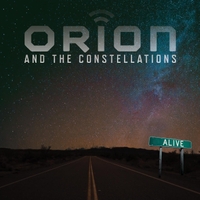 Album Review for Orion and the Constellations – Alive

Orion DiFranco on vocals and guitar, is a former steel worker from Columbus, Ohio, who worked hard by day and practised his Blues licks hard at night.

Having formed the band, they released their debut album, 10 Years, in 2016 and Alive, their follow up draws the music into a solid core of Blues and Funk rock.

Primarily a trio, Jason Rau on bass and Erik Rau on drums, they have added Kevin Ashba on keyboards and this gives an added depth to their overall sound. The resulting album is a true reflection of the hard-drinking, hard-working blue-collar life.

Song titles reflect this, Steel Mill Poet, a song recalling Orion’s years in that industry where he recalls “It’s not about the few, it’s about the many”. A reflection on the selfishness of bosses and a challenge to get people to think of others.

Drinkin’ Hole is a short song but tells the age-old story of hurt at seeing your lady in the arms of another man. A solid rocker with an expanded guitar solo mid-way through.

In Beauty Queen, Orion laments his sorrow at falling into a deep dark hole after spending all his money on alcohol, all because of his love for a beauty queen who got the best of him.

Midnight Blues is the classic twelve-bar rocker that will have the dancers on their feet in no time at all. Best track here is a slow Blues that drips with feeling and emotion.

Act Of War is the classic Blues story of neglect and rejection and Orion’s playing wrings that feeling from every note bending string.

Orion has a great voice, and whilst this album suffers by its length, eight tracks logging in at just over twenty six minutes, overall, the band nail their sound to the wall.

For More Info – ORION AND THE CONSTELLATIONS