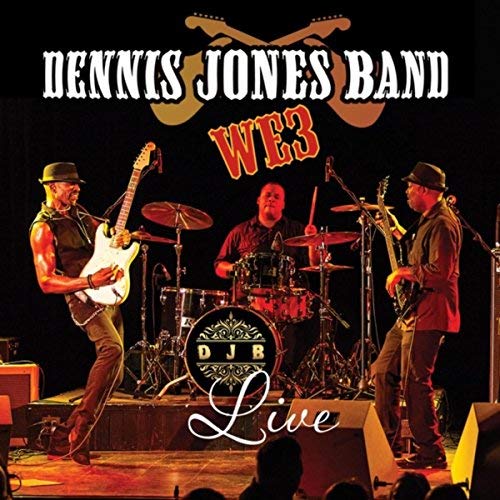 The sixth album by this Los Angeles power trio was recorded at a gig in Montana and finds bluesman Dennis drawing on his previous albums for his material, plus finishing off the proceedings with a storming version of Albert King’s Born Under A Bad Sign.

Dennis first came to international attention when he was a member of Zac Harmon’s Band that won the International Blues Challenge in 2004.

He has a strong, muscular approach to his vocals and guitar playing, and his rhythm section of Sam Correa on bass and backing vocals and drummer Raymond Johnson provide just the kind of backing this music needs – though Jones’ music is in no way one-dimensional.

Proceedings begin well enough, you can sense the band easing into the show, and the intensity racks up a little, appropriately enough, when Dennis turns to track three, Passion For The Blues, and the high energy approach, with occasional Hendrix-y type of playing, continues up to the jazzily swinging shuffle of Super Deluxe, the lyrically incisive funk-tinged blues of Enjoy The Ride and the relatively mellow You Don’t Know A Thing About Love, with Latin touches.

There’s a low-down and dirty tint to the grinding anti-drugs track, Kill The Pain, Big Black Cat is a fine straight down the line blues, Devil’s Nightmare is nice and tough, and I’m Good is another fine shuffle, before Dennis turns his hand to the aforementioned Albert King’s classic and mashes it up with Jimi Hendrix’s Voodoo Chile.

Yes, I enjoyed this one a lot!