NICK STEED 5 Feeling For The Blues 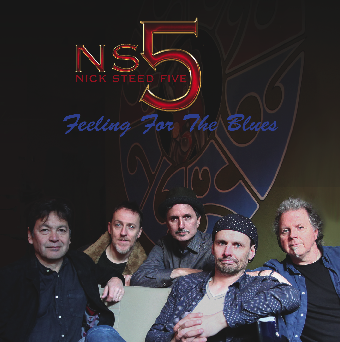 Album Review for NICK STEED 5  – Feeling For The Blues

What we have here is a thoroughly professional outing, featuring strong musicianship from all concerned – but which lacks the kind of spark necessary to really grab you by the ears.

Partly this is down to the vocals of main man and keyboard player Nick Steed, which are consistently competent and tuneful but lack the individuality to bring character to the songs.

As a result, the 12 tracks on Feeling For The Blues begin to feel samey, and the album as a whole overlong. Which is a shame, because the playing from the Nick Steed 5 and assorted guests is consistently tasteful.

The opening Supercar Loan is a jaunty, Dire Straits-like affair with some sweet slide guitar from Nick Mellor, founded on some good shuffling drums from Steve Gibson.  And in fact, Gibson offers a pleasing variety of rhythms across the album, from the touch of “shave and a haircut, two bits” on the soulful Boom Baby Boom, to skipping funkiness on the languid title track, and more besides.

The title track hints at what might have been, with warm jazzy piano from Steed and a sun-kissed sax solo from Kim Nishikawara, and with nice backing vocals from Linda Jennings, it aspires to a Steely Dan sheen until it begins to outstay its welcome.

There’s also a pleasingly easy jazziness to Take Your Time, with easy horns and subtle organ from Steed carrying echoes of the classic I Wish I Knew How It Would Feel To Be Free.

Hot Shot Lady offers more urgency, with Steed summoning up a bit more vocal oomph to go with his rattling boogie piano and the stabbing horns from Nishikawara and Steve Hallworth on trumpet.

Meanwhile Cold Hearted Woman squeezes numerous good moments into less than three minutes, including a nifty guitar break from Norman Beaker over another satisfying rhythm from Gibson, and Who’s To Blame adds some AWB-style funk to the mix, with ticking wah-wah guitar from Pete Mason, another strong sax solo, and a warm organ solo from Steed.

Feeling For The Blues is a neat and tidy affair, but ultimately underpowered.

The Passing of a Legend: Remembering PETE SARGEANT
Today the Blues world has not only lost one of it's mos...
R.I.P. Phil May
PHIL MAY - 9th November 1944 – 15th May 2020 Lead si...
George Benson is Walking to New Orleans
George Benson gets back to Americana basics on 'Walking...
HOLY MOLY & THE CRACKERS, RUTH PATTERSON I’d Give It All - Redux
Released independently by Blank Studios, the word redux...